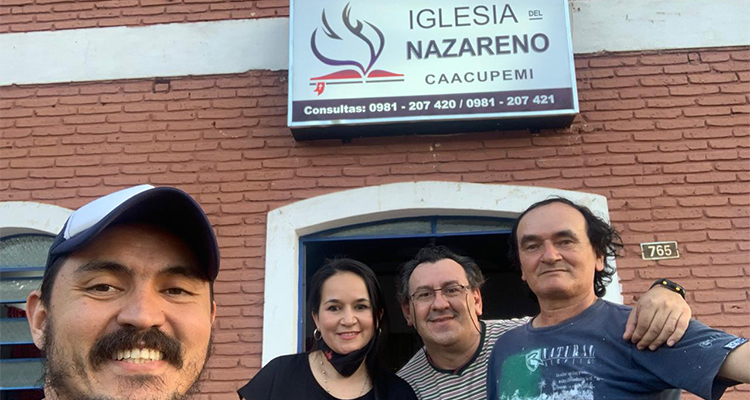 The Church of the Nazarene in Caacupemi, Paraguay, was officially re-opened on 3 August 2020 after being closed for more than 10 years. The reopening is part of the Central Paraguay District’s RENACE (Rebirth) initiative.

When District Superintendent Yoan Camacaro arrived in Paraguay in January 2019, he began reopening churches using RENACE. The growth of the district had stalled out for a variety of reasons, including a need for further development at the local level. As growth stalled, churches began to close.

“Paraguay has 30 churches, 23 active and seven that have been closed,” Camacaro said. “In my district, we have five closed churches, including the one in Caacupemi.”

Through the RENACE initiative, the district hopes to open 14 churches throughout the country by re-opening the five that were previously closed as well as planting nine new churches.

This vision is developed with six key principles, and RENACE acts as an acronym for what they want to accomplish:

R: Revitalize—Revival; fervent search for the presence of God

E: Enviar (send)—Involvement in your local church and district vision

“RENACE was born so the church in Paraguay may experience an awakening,” Camacaro said. “Just like a plant; though it may die, it will leave an offshoot that grows, multiplies by bearing fruit, and grows to its full potential. So is this vision that aims to change the history of the Church of the Nazarene in Paraguay.”