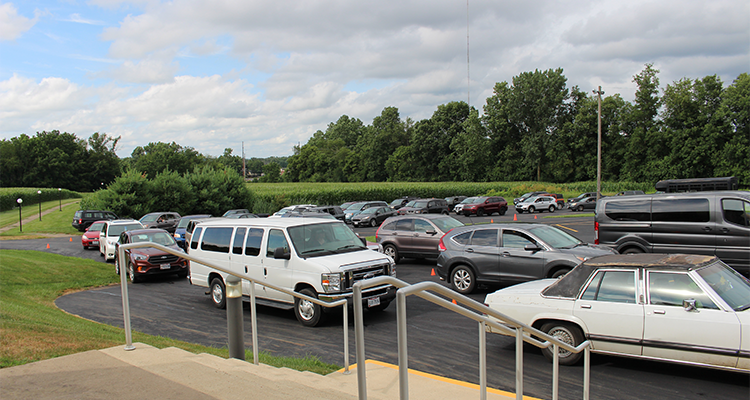 When residents of Mount Vernon, Ohio, lined up to receive groceries through a federal food program, they didn’t know they would also receive prayer. Lakeholm Church of the Nazarene is now seeing the fruits of their outreach effort come full circle.

Starting in June, nearly 500 cars would line up in the parking lot at Lakeholm Church of the Nazarene every Wednesday to receive groceries through a federal food program. As the cars waited in line, sometimes for more than two hours, a team of six volunteers offered to pray with the drivers.

Pastor Scott Sharpes saw it as a great connection point and ministry opportunity in the community.

“After a while, we got to know and recognize people as they came through the lines,” Sharpes said. “That’s really why we got started because they were coming to us, and we thought we needed to engage them and tell them that we cared about them more than just giving them food, but were also interested in where they were spiritually.”

The team of prayer partners would make their way through the lines, praying for those who were receptive.

“We had people ask for us to pray for surgeries, lost loved ones, and things that had been going on in their families lives,” Sharpes said. “It became a very personal time for our prayer partners to talk to those that were coming for food.”

Lynda Small, a volunteer, recalled praying with a young woman who had tears in her eyes.

“I prayed with a young lady who was expecting,” Small said. “With tears in her eyes, she shared how she never has asked for anything free before but her business as a medical massage therapist had been cut in half because of COVID-19. What a privilege it was to lift her requests to heaven.”

While the distributions are momentarily on pause, program officials are hoping to resume them in the new year. Several people who attended the food distribution have continued to connect with the church.

One woman who became a regular at the distribution prayed consistently with a certain volunteer about her son’s need to enter rehab for his alcoholism. Just one week ago,  the woman called the church to share the good news: her son was finally getting some help. The volunteer was able to reconnect with the woman over the phone and celebrate their prayers being answered.

“In a hurting world, people are looking for glimmers of hope,” Sharpes said. “We’ve always said that we want to help people find their place in the story of God. With the world coming to our facility, we wanted to engage with them and let them know that we’re not just a church within these walls but that we genuinely care.”