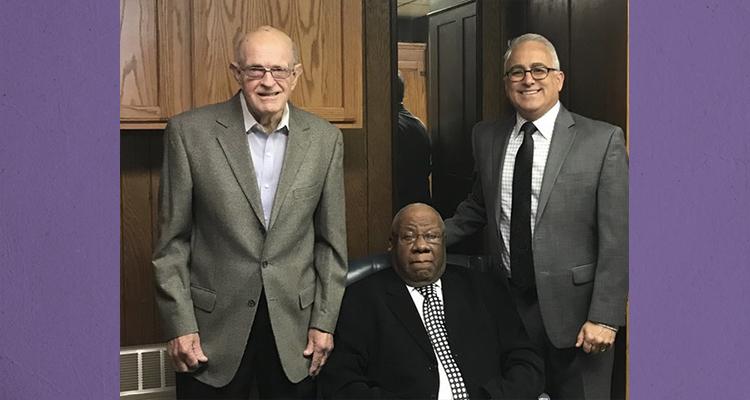 After serving “The Hill” community for 90 years, the congregation at Steubenville First Church of the Nazarene realized their time as a church was over. As they searched for someone to buy the church building, they connected with a congregation who had a passion for the community.

In the months and years prior to connecting, both churches had been struggling. Founded in 1929, Steubenville First had 90 years of history in the same building and same community. As the neighborhood’s demographics shifted, the church updated its ministry targets to try to reach the new makeup of the community around them. But after their most recent pastor, Don Lawson, retired, the church found itself at a crossroads.

Across town, Pastor Calvin McCloyd and the Calvary Missionary Baptist congregation were struggling in their current building. The high rent, coupled with constant maintenance and a lack of space to put down roots in the surrounding community, was weighing down Calvary Missionary Baptist’s ability to grow. McCloyd hadn’t taken a salary in over six months in order to meet the church’s other financial obligations.

“I had several conversations with Pastor McCloyd over the next few weeks,” said Dave Lutz, East Ohio district superintendent. “The leading of the Holy Spirit had kept him from retiring, and he was working hard to start a new church that would reach the neighborhoods where our church building was. He was the kind of pastor and that congregation was the type of church that could work and make a difference that we had been praying about.”

McCloyd had offered a tithe to the Church of the Nazarene for the building, but the proposition didn’t sit well with Lutz. Although he felt prompted by God to just give the building to McCloyd and his church, he was hesitant to approach the District Advisory Board about the gift.

“While this was supposed to be the year of courage, I was struggling to have the courage to bring this up to the Advisory Board,” Lutz said. “We need money to plant churches, and how is that supposed to happen by giving buildings away?”

At the next District Advisory Board meeting, Lutz told the story of Steubenville First and Pastor McCloyd and his congregation. As Lutz finished speaking, there was a moment of silence. Then one of the board members spoke up.

“Why don’t we just give them our building?” he said. “Let’s give it to them and bless them.”

The board voted unanimously that night to bless the Calvary Missionary Baptist Church by giving them the church building.

“The blessing of this gift let us know this was a movement of God, where we were able to come into this blessing,” McCloyd said. “When Pastor Dave met with us and said this was going to be a donation from us, there was one thing he asked us to do; he asked us to win this community. We want this church to be a blessing to this community.”

Calvary Missionary Baptist Church moved into its new building in November. While the COVID-19 pandemic has slowed the church’s attempts to reach the neighborhood, the congregation has still added four new families from the surrounding community.