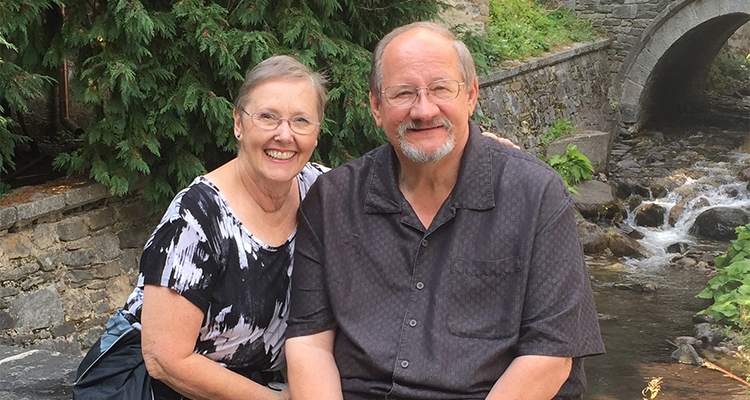 During the onset of the COVID-19 pandemic, Bill Grigory, a missionary to Bulgaria, found himself alone in lockdown in the city of Varna without access to his bank account. His wife, Theresa, was stuck in the United States following what was supposed to be a quick visit to check on her ailing mother.

“I dropped Theresa off at the Bucharest (Romania) airport on March 10, and drove back to Varna, which is five hours away,” Grigory said. “March 11, that evening, all of a sudden the pandemic was declared. At that moment, I was like, ‘This could be a problem.’”

Doug Mann, the Eurasia Region’s finance director, and others involved with finance on the region tried to find a creative solution to the problem. Eventually they found a way to get Bill access to limited funds. Bill was able to pay rent and buy food, but his financial situation was uncertain.

His second crisis was long-term isolation as his wife was still stuck in Texas with her mother still. The Bulgarian government had made it illegal for people to leave their homes except once a week to buy food and to seek medical care.

“I really was totally isolated. And that’s OK for a couple of weeks, and then after a month, and then two months, but after a while, you can almost go crazy.”

Varna is a pioneer area for the Bulgaria District, so there is a small Bible study but no Nazarene church. Bill moved the Bible study to Zoom (video conference) meetings. He also coped with the isolation by attending every Nazarene Zoom meeting to which he was invited.

His family rallied together despite being scattered across Hawaii, Texas, Romania, and Bulgaria. Bill decided to offer twice-a-week devotionals for his grandchildren in Hawaii over Zoom. Theresa and her mother joined, along with other family members.

“Everybody agreed that was a lifeline for all of us,” Bill said. “We all needed that connection.”

By the time the couple had given up on being reunited in Bulgaria, their scheduled home assignment that would start in August was just two weeks away. Bill got busy setting up the logistics in Bulgaria so he could leave the country indefinitely.

When it was time to catch his flight to the U.S., he confronted a new logistical nightmare: the attempt to cross the border into Romania, where the nearest international airport is located. Romanian border officials turned him away twice.

The third time he attempted to cross, he prayed for a miracle.

“I saw a little blue car with a Romania license plate. I whipped in behind him. As we got to the border, the police car that had been blocking the way moved, and the officers were just standing around. They saw the blue car’s plates and gave him the nod. I stayed right on his bumper and I got to the Danube River. I paid my toll and got across.”

When he reached another border crossing, the officials seemed troubled by the combination of his American passport and Bulgarian residency card. They talked for such a long time that Bill became worried.

“They came back with an officer, and he had a gun. I thought I was going to get arrested.”

Finally, the woman pushed his documents at him with the terse instruction, “Go!”

“Man, I hit the gas pedal. I wasn’t going to wait another second. I am sure that people were praying,” Grigory said. “I am absolutely convinced.”

This is an adapted version of a story that appeared in the September edition of Where Worlds Meet. To read the full story, click here.