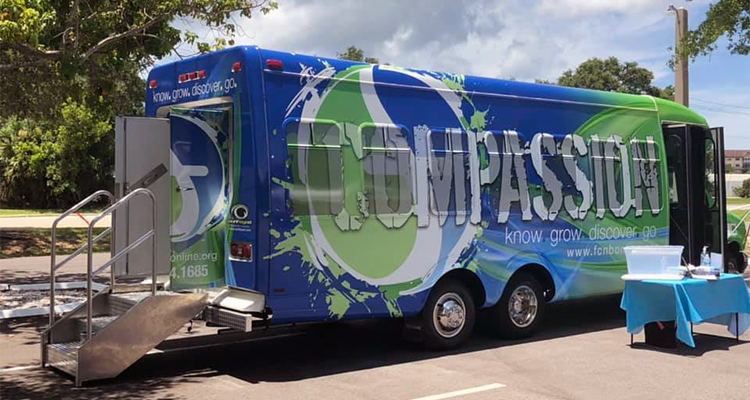 A Florida church has turned one of its busses into a mobile ministry center to serve the local homeless community.

Bradenton First Church of the Nazarene Lead Pastor Steve Gibson used to work in Emergency Management Services (EMS) before receiving his call to ministry. He knows the city well, specifically that there was an underserved homeless community.

“We are not in a specific area that we have a lot of homeless but we’re within a rocks throw of the part of the city that does,” Gibson said. “So how do we accommodate some of their needs?”

He thought of a bus that they were no longer able to take on long-distance trips. He realized it was still durable enough to use in town, so they retrofitted it for a new purpose.

“It’s got a laminate floor and custom racks and hangers and drawers,” Gibson said. “Through a sponsorship with a local periodontist, they stock the drawers full of toothbrushes, toothpaste, and floss.”

The bus has a clothes closet and washer and dryer. During the bus’ first week of operation, Bradenton First joined with another church that had a portable shower unit. The partnership allowed people to take showers, do laundry, and even pick out some new clothes.

Bradenton’s median age was around 75 when Gibson was working in EMS. Now that has dropped to 52, and the homeless population has increased. Bradenton First decided to address the struggles and hurts that came with the increase in homelessness.

This bus is the tip of the iceberg for Gibson and Bradenton First. When Gibson returned to Bradenton from a pastorate in Michigan, he saw how the city had changed and felt that the church was underperforming in reaching out to the community.

“We have kids that are sleeping in their cars,” Gibson said. “They are Division One (college) football candidates, and the schools can’t help them. But we can.”

The church’s next bus is aimed at youth and will be outfitted as a safe place for them to spend time.

“We’ll feed them at night and have a widescreen TV to play video games, watch movies,” Gibson said. “We’ll even have kayaks and bicycles on the bus. We’ll make sure that they get some enjoyment out of life.”

Gibson’s biggest hope is that another church can see what they’re doing and replicate it.

“I would be absolutely ecstatic to have this copied in other communities,” Gibson said. “It’s really quite an easy way to share some dignity and compassion with people.”