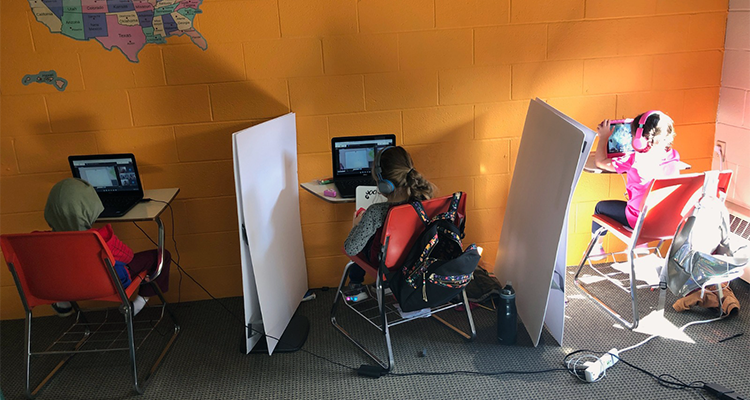 Lansing First Church of the Nazarene has expanded its daycare services to include a space for school-aged children to complete their distance learning.

When the local school district announced it would implement distance learning models, church leaders knew some parents would be left in a lurch, including their own daycare parents. It’s a common problem across the country as school districts opt for distance learning programs to ensure the safety and health of their students. Many working parents can’t stay home to help their children, and the children are often too young to stay at home by themselves.

The church saw many community members becoming stressed about the upcoming school year. While the daycare didn’t have much of a program in place for school-aged children, the pastoral staff considered adding one due to Children’s Pastor Jesse Briles’ experience working with the age group.

Briles decided to gauge interest by suggesting the idea in some of the local parent Facebook groups. The interest was there, so they put out a few advertisements. The church quickly filled up the slots for school-aged children and even had to turn some families away due to limited staffing and space to follow social distancing guidelines.

“We had eight spots that we were going to make available to not only keep kids safe but to let them be able to learn and not be overwhelmed,” Briles said. “But we were really surprised by the interest that we had.”

One hurdle they needed to overcome was the acquisition of desks. The prices of individual desks had skyrocketed due to the pandemic, and Briles again put out an ad on Facebook. Robbie Cansler, the pastor of Mission Church of the Nazarene in Hammond, Indiana, said her church had several desks in storage that Briles could have, free of charge.

Lansing First’s new program charges a small fee to cover some basic costs, but the church has made exceptions for families with difficult circumstances.

“It was really a good opportunity for us to continue to minister to these families,” Briles said. “One of the families, the parents are working but the dad wasn’t getting paid at all. So we were able to give them a discount and help them out. We’ve really been able to work with people to help provide this with what they can afford.”

For many of the children, their only connection to the church is through the daycare.

“We are using the church staff to support this and make sure it’s very ministry focused,” Briles said. “We want to make sure we are focusing on the well-being and the whole health of the children. We’re not just keeping them safe and helping them learn but we’re also providing some discipleship as well.”