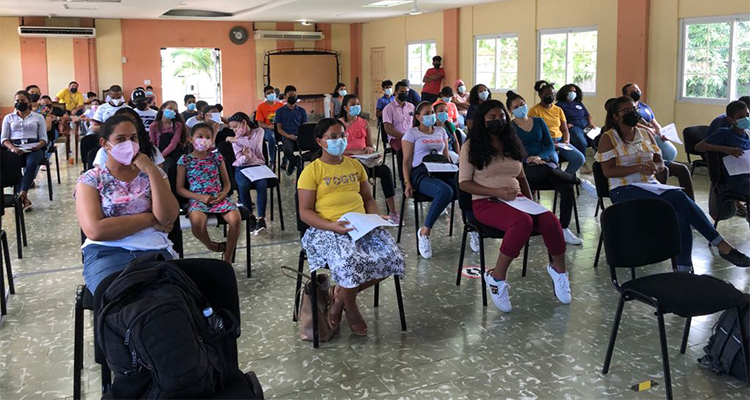 Academia de Música in Panama opened its doors to its first students after 17 months of waiting due to the COVID-19 pandemic. On 14 August, a team of six teachers and an administrator from the new music academy welcomed 52 students, both young and old, at the Río Abajo Church of the Nazarene facilities.

"The music academy has been a response from God to the need to develop musicians and worshipers in our churches in the Central District of Panama," said Friendly Polanco, pastor of Río Abajo. "Today we see the great blessing of having a place where you can prepare for the worship ministry."

Students attend the music academy once a week for three hours. Last week, the academy registered more than 70 students ages 10 to 70.

Neal and Cathy McMullian, a retired Nazarene couple from the USA, are in charge of the academy. The vision for the school started three years ago after Cathy and Neal led a missions trip to Panama with students from Olivet Nazarene University. The McMullians felt that the Lord was asking them to move to Panama to serve Him in a new way.

"At the time we didn't know what He had in mind for us to do," Neal said, "but over the years, He had prepared us in different areas."

Both Neal and Cathy worked in education in the USA before moving to Panama. Neal had taught music in public schools and universities, and Cathy worked with children and college students, respectively.

"God was preparing us for something new," Neal said.

Two years ago, the McMullians moved to Panama to work with Carlos de la Cruz, superintendent of the Central District of Panama, to develop a music academy for the Church of the Nazarene there. Neal said this academy aims to encourage and develop musical talents in the church and allow for greater participation in praise and worship to God.

Gathering Point Church of the Nazarene, the McMullians' Church in Bourbonnais, Illinois, worked hard to help them raise funds. Through those gifts and other blessings, they purchased instruments and equipment for the academy and were finally ready to begin teaching in March 2020. But the week they had planned to start, Panama closed schools and established a strict quarantine.

“COVID-19 seemed to have put an end to our plans,” Neal said. “But, as the Waymaker song says, '…Even when I can't see, you're working.' And God was still working.

This delay gave the McMullians an opportunity to improve their Spanish, learn more about the local culture, and develop strong relationships with many people in Panama. They learned to move around the city more easily and made new friends who later became teachers at the academy.

"In many ways, the guidance of God's hand became evident," Neal said.

“We don't know where this path will take us, but we do know that God has a plan and our job is to take the next step,” Neal said. “We are comforted by the fact that God is ahead of us, and more importantly: ‘For I know the plans I have for you,' declares the Lord, 'plans to prosper you and not to harm you, plans to give you hope and a future,’ Jeremiah 29:11.”