They will know us by our love: Marvin's Story

They will know us by our love: Marvin's Story 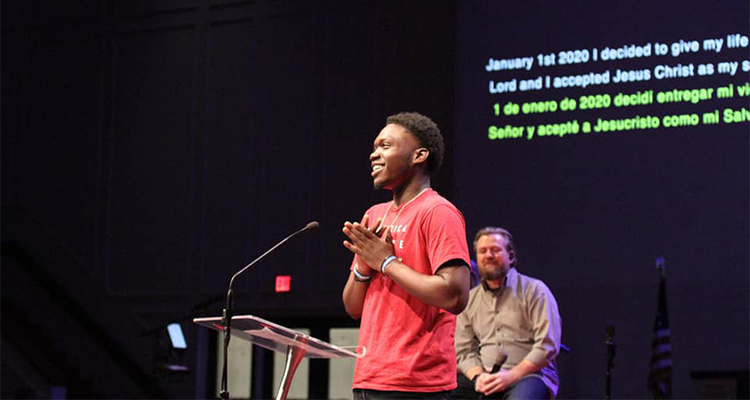 A young man named Marvin was facing life in prison. His youth leader, Jenee Noriega, stood up for him and worked with his lawyer so Marvin could have a second chance at finding a brand-new life. Jenee's passion to fight for Marvin stemmed from her own life experiences.

Marvin grew up homeless, along with his father, for much of his early childhood. His father’s abusive behavior and alcohol addiction made it difficult for him to provide for Marvin consistently. In school, Marvin started getting into trouble, leading to more problems outside of school as he got older. While in middle school, Marvin turned to selling drugs to provide for himself.

“It was hard, I had no hope at the time,” Marvin said. “I even asked myself, ‘Why am I here? What’s my purpose?’ I asked myself this a lot. And many nights I would just cry, asking ‘Why me?’”

At school, Marvin became friends with Destanee. Destanee’s mom, Jenee Noriega, has been an associate pastor at Total Life Church since 2018 and conducts a youth Bible study. Even though Destinee kept inviting Marvin to the Bible study, he continued to turn down her invitations.

One night, Marvin and his friend were walking around downtown Kansas City when Destinee, along with her mom and some other teens from their youth group, spotted him. Noriega invited the two to get ice cream, and they did. Marvin instantly realized there was something different about Jenee.

“She really showed me the love of Christ,” Marvin said. “At that time, I didn’t know it [was Jesus], but I could tell she genuinely is a loving person and that’s something I had never seen.”

Marvin started showing up to youth groups and Bible studies. He eventually accepted Jesus Christ into his heart on 1 January 2020 at a New Year’s party that Noriega hosted. But things would get harder for Marvin.

His dad kicked him out of the house at the beginning of the pandemic, and Marvin resorted to his old environment on the streets. He committed an armed robbery to feed himself and eventually was sent to jail facing 60 years to life in prison. He realized that he was alone, just he and his cellmates. Nobody on the outside seemed to care about him, except Jenee Noriega.

Noriega had been in Marvin’s shoes before. She had been homeless, abused by her father, and abandoned by her mother, just like in Marvin’s life. She herself had spent time in prison. One Sunday, Noriega attended church and prayed with a woman who began knocking on her door every week to reach out and bring her to church.

She came to the Lord because of the faithful and persistent Christians at Sandia Church of the Nazarene in Albuquerque, New Mexico. Having come from similar backgrounds, Noriega’s life journey intersected with that of Marvin’s. So Noriega kept knocking.

Noriega began putting money on his books, an act of kindness someone had done for her when she was in prison. Marvin would call her and get caught up on the weekly Bible study. He eventually started leading fellow inmates in Bible study at the prison.

After working persistently behind the scenes with Marvin’s lawyer and parole officer, Noriega was able to appeal Marvin’s case before a judge to drop the charges against him. Both Jenee and Marvin’s prayers were answered—the judge dropped all charges against Marvin.

“God’s grace to me was a second chance,” Marvin said. “He was speaking to me through the hard times, even when I didn’t acknowledge it. He saved my life, so His Grace is everything to me.”

Marvin desires to share his story so that others may come to know the same God that saved and rescued him and continues to love him. He has felt a call to ministry and hopes to pursue that after graduating high school.