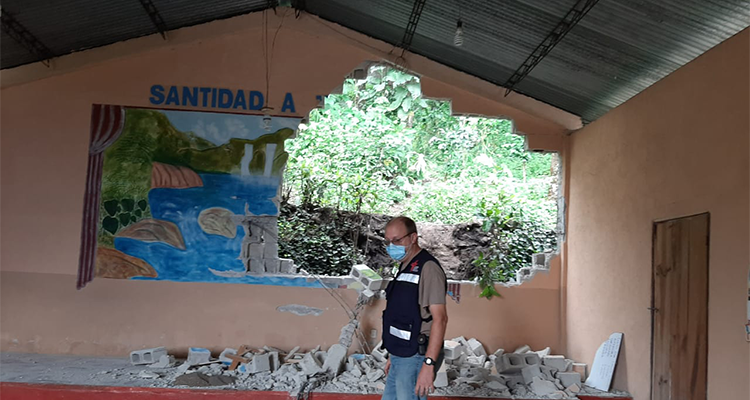 A large rock slide in San Marcos La Laguna, in Guatemala, killed four people and destroyed five houses along with a Nazarene church. The slide occurred on 6 October 2020 at approximately 7:15 p.m. local time after several days of heavy rains caused the rocks to become detached from the mountain.

"Everything happened in the blink of an eye," said the villagers. Some were dining with their families and others were preparing to attend a 7:30 meeting at the Church of the Nazarene.

The rocks fell at high speed, destroying everything in their path from trees to houses. In addition to the four people who died, 10 others were taken to the nearest hospital. During the night and the next day, the authorities evacuated about 60 families.

The infrastructure of some houses suffered significant damage, including the building of San Marcos La Laguna Iglesia del Nazareno. However, the pastor and his family are well and the parsonage did not suffer any damage.

“A large boulder came through a wall of the sanctuary and bounced about twice until it fell and destroyed another wall, then stopped right on the sidewalk before reaching the house,” said Damaris Kellogg, Nazarene Compassion Ministries coordinator for the North Central Field.

Kellogg visited the site the next day.

“God’s protective power stopped that boulder from rolling away and falling into the manse,” she added.

She also thanked the Lord for taking care of the entire congregation since they were to meet that night, minutes after the boulder fell.

Kellogg visited the scene with Work & Witness Coordinator Roger Kellogg to assess the damage and bring immediate help to the victims. NCM provided 100 emergency kits and 50 kits for children that included a snack, a coloring book, crayons, and a small toy. Some members of the congregation were present during the visit, and the group took time to thank God for saving their lives.

The ministries have planned to participate in the cleaning and rebuilding of the church, but for now the area has been marked by the authorities as a red zone or in danger.

"We pray that there will no longer be another landslide in that region, just as we pray for the families who lost their loved ones and for the other families who have gone into a nervous breakdown because of what happened," Damaris said.