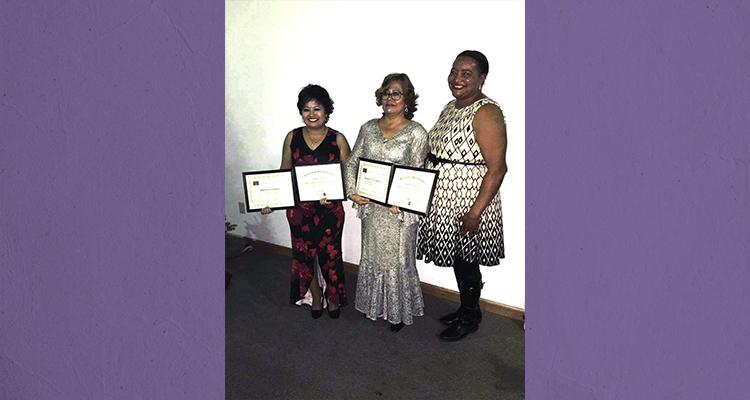 Brenda Esparza had always considered herself a Christian until she began attending discipleship classes at the Mission Training Center in Albuquerque, New Mexico.

Esparza and her family moved to the area in 2013. Shortly after her arrival, Esparza received a speeding ticket when her neighborhood’s speed limit decreased due to the nearby state fair.

“I was very upset,” Esparza said. “I called my husband and said ‘I’m not going to pay this.’”

Instead, she chose to volunteer at Grace Thrift, a compassionate ministry run by Sandia Church of the Nazarene. One of the first people she met was Pastor Patti Rivas.

“The first time I met her, something clicked,” Esparza said. “She hugged me without even knowing me, and I just needed that hug so much at that time. She hugged me and told me how happy she was that I was there working with them, and we just started talking every day.”

A couple of months later, Esparza told Rivas about her daughter’s upcoming dance recital. Both mother and daughter were upset because of the lack of friends and family to watch the performance, and her daughter even mentioned not participating.

“She not only stayed to watch her but she made her feel that someone was there for her, that she had someone who cared,” Esparza said.

Esparza and her family followed through with their end of the deal. The Christmas program was held on a Saturday night, and there was an invitation at the end of the program for people to come to the service on Sunday. Her kids were excited, so they went to church the next day. The youth pastor immediately introduced himself to the family and offered to pick up Esparza’s teenagers for youth group and Bible study.

“I had never encountered that type of attention from a church,” Esparza said. “But at that time, that’s what we needed.”

The first class she took was “How to Study the Bible,” which she thought would be easy. As the course progressed, Esparza realized how much she had been taking the Gospel for granted.

“We just take it like any other book,” Esparza said. “If we don’t open up ourselves to what God wants to do in our lives, what God is telling us with every single word that is in that book, we’re never going to find our true potential as the children of God.”

Esparza continued taking classes and began to lead the young adult Bible study. She now sees just how much the classes have impacted her and her family’s lives.

Esparza’s now-adult children are involved in the worship ministry at the church, and her parents lead the Spanish ministry at the church’s Valley Campus. After taking classes at the Mission Training Center, they felt called to pastoral ministry and went on to receive their local minister’s licenses. Lead Pastor Steve Myers credits Esparza, who helps translate, and her family with getting the Spanish language congregation and ministries off the ground.

Esparza looks back at everything she and her family have gone through over the last seven years and sees God’s hand in everything. She hopes people who hear her story learn to cede control to God.