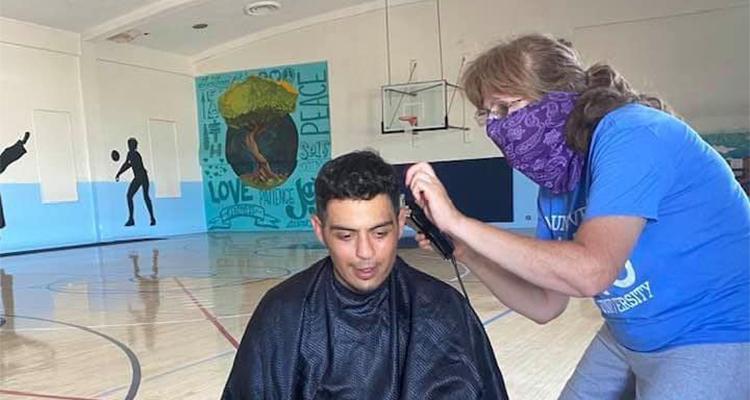 Sandy Burdette and her husband, Daniel, sold their house in West Virginia, packed their belongings in their car, and set out across the country to follow God’s call to work with the homeless and others who are on the streets.

Sandy previously pastored Davis Creek Church of the Nazarene in Charleston, West Virginia, until September 2018. After selling their house in West Virginia, the couple went to Florida and were planning to purchase an RV to travel the country and evangelize.

“We put $3,000 down on an RV and decided we’re going to minister all over the United States,” Sandy said. “We go that day to purchase it, put the money down, and go back to where we were staying. Both of us were up all night, sick in our spirit.”

They realized God was placing Los Angeles, California, and Hollywood on their hearts. Sandy made a call to Los Angeles First Church of the Nazarene and they headed straight to Hollywood. They began evangelizing to those who were on the streets, whether they were homeless or suffering from mental illnesses. Their mission is to help the people they meet however they can and show the love of Christ.

The Burdettes have been in Los Angeles since May 2020 and have started a Bible study outside of Los Angeles First Church. Last week, they had eight people show up. Sandy says asking them their real name brings an understanding that they’re valued.

“When people know that you value them when they’ve lost value of themselves, it’s the most beautiful thing to see restored just by saying, ‘What’s your name?’” Sandy said. “They look at you like you have four heads. They usually will give me their street name and then their real name. When they tell me that, it feels so sacred because they’re really opening themselves up.”

The Burdettes’ willingness to step out in faith and in obedience to the leading of the Holy Spirit traces back to Sandy’s acceptance of her call to ministry.

Sandy became a Christian in her late 20s, shortly after she married her husband. Once she accepted Christ, she began to feel a pull toward ministry. However, she wasn’t sure if she believed women could be preachers. After hearing General Superintendent Emeritus Nina Gunter speak and learning more about the role women played in the history of the Nazarene church, she approached her district superintendent and fully accepted that call on her life.

Fast forward 17 years and Sandy continues to step out in faith where God leads. She hopes that others can follow suit, noting just how easy it is to be the hands and feet of Christ to those who are on the street in your own community.

“You can do it anywhere,” Sandy said. “You can put pop-tarts in your car and anytime you see somebody hungry, you give them one. I keep dog food in my car. If someone that is homeless has a dog, give them a little bag of dog food. It’s just simple.”