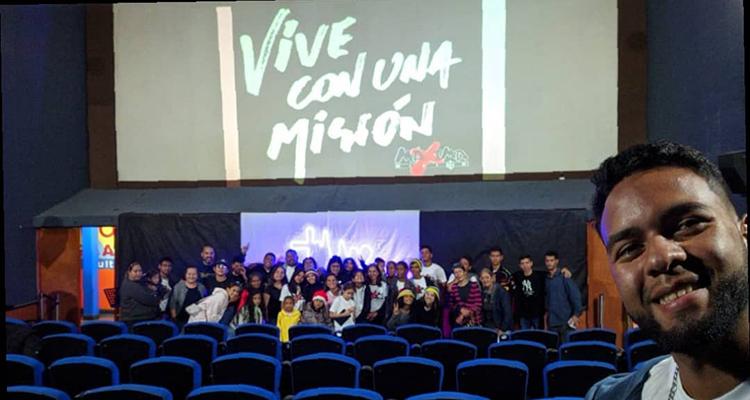 A team of 60 young people from the Venezuela Primero District participated in a Maximum Missions weekend from December 2 to 4 in the state of Miranda. The event was organized by the district Nazarene Missions International council in fulfillment of its objective to involve children, youth and adults in missions.

The project began with a trip to Emanuel, a church-type mission led by Pastors Edgar and Yannys de Reina. The team was sent to evangelize various areas of the Las Minas neighborhood in San Antonio de los Altos. Children, young people, and leaders from the San Diego, Peniel, Carrizal, and Millennial churches visited community homes despite the rain. The activity was led by Alfonso Garrido, who instructed all the participants on reaching others with the message of salvation through the tools of the JESUS film. The team also invited people to the medical day on Saturday.

“It is very important that, as young people, we have the school of evangelization,” said Gabriela Colmenares, a member of the Peniel church who attended the event. “Evangelizing personally cannot be achieved behind a screen.”

That evening, the first joint service of Maximum Missions was held. Oriana González, worship director at the Millennial church, gave a powerful teaching to all those present.

On the second day, the team provided various services to the community, including dentistry, general medicine, pediatrics, psychology, and hairdressing. There were also clothing sales and candy tables. In a nearby field, more than 25 children participated in an evangelistic and recreational activity with music, dance, and a puppet show conducted by several young people attending the Maximum Missions.

A special missions service was held that evening when Pastor Edgar Reina preached and ministered to the young people on the team.

“The Holy Spirit manifested Himself that night, from the songs to the preaching,” Colmenares said. “All the young people enjoyed a beautiful time of recreation and games where a good friendship grew with the different churches present.”

On Sunday, all the young people went to the Millennial Church of the Nazarene in San Antonio de los Altos for Sunday service to hear a message from Venezuela Primero District Superintendent Lember Romero.