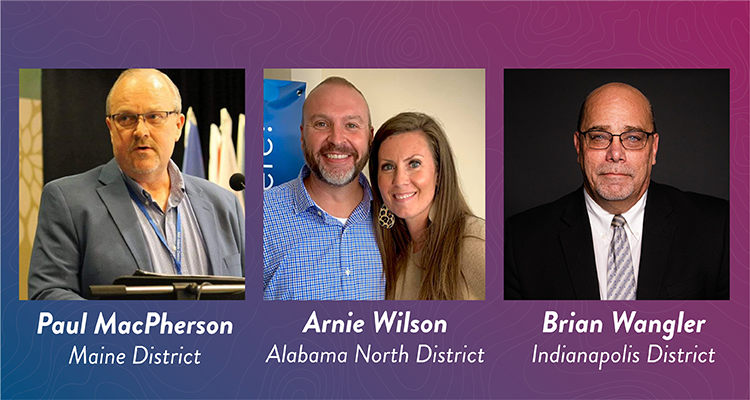 As District Assembly festivities began on the USA/Canada Region, three new Superintendents were elected in the past week.

Paul MacPherson has pastored Leonardtown Church of the Nazarene in Maryland for the last 10 years. He served previously at Leonardtown from 1994-2000. He and his wife Theresa currently reside in Leonardtown, Maryland.

"Theresa and I are truly humbled and honored to be invited to come alongside the wonderful people and congregations of the Maine District to engage in God’s mission,” Paul said. “We look forward to the future into which God is calling us, believing that God wants to do some amazing and innovative things through the congregations that make up this great district.”

MacPherson replaces Stephen Dillman, who is retiring after leading the Maine District since 2017. MacPherson’s new assignment is effective 15 June 2022.

MacPherson attended MidAmerica Nazarene College (now University), where he earned his Bachelor of Arts in Christian Ministry in 1988. He completed his Master of Divinity at NTS in 1994.

Arnold Wilson II, better known as “Arnie,” has been the lead pastor of Farmdale Church of the Nazarene in Louisville, Kentucky, since 2009. He replaces interim superintendent, Larry Dennis, who has served the district since August 2021. Wilson’s assignment is effective 14 June 2022.

Wilson II graduated from Trevecca Nazarene University in 2003 with his bachelor’s in pastoral ministry. He and his wife, Faith, reside in Louisville.

Brian Wangler has been the lead pastor of Chicago First Church of the Nazarene since 2012.

He replaces Ron Blake, who is retiring after leading the Indiana District since 2011. Wangler’s new assignment begins 16 June 2022.

Wangler attended Olivet Nazarene University, from where he graduated in 1992.

Wangler and his wife currently reside in Lemont, Illinois.