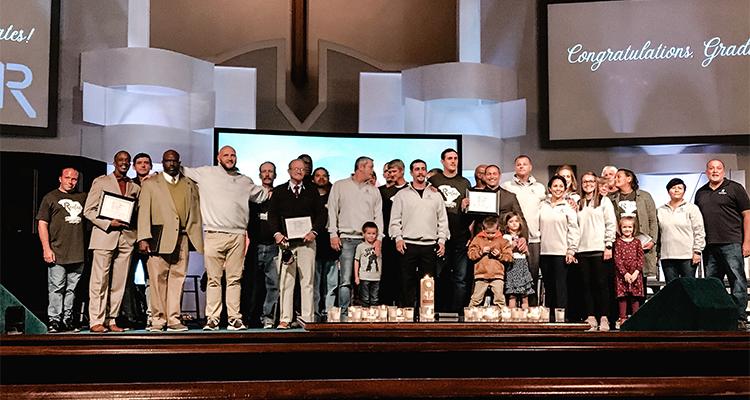 Reconciliation Ministries students celebrate their graduation through their various programs.

Zachary Gibson had been addicted to drugs since he was 13. By the time he got married and had children, he thought it was something he had under control.

“I thought I could keep my sin in a nice little bag and pull it out when I wanted to and put it back away when I thought it was enough,” Gibson said.

After being jailed for the seventh time due to various infractions caused by his addiction, his wife left him and took their children. Gibson knew he would be homeless when he left the jail, so when his mother recommended Reconciliation Ministries, he accepted an offer to join the program.

Reconciliation Ministries is a Nazarene Compassionate Ministry started by Columbia First Church of the Nazarene in South Carolina. As the epidemic of substance abuse rose, the ministry added a Celebrate Recovery program, which evolved into men’s and women’s residential rehabilitation and discipleship program.

Gibson grew up in the church and believed that God existed but never really understood why that mattered. RM helped turn those lights on for him. He compared it to God slowly sliding up a dimmer switch, leading Gibson to realize he was worthy of salvation.

“I truly believe that if I wouldn’t have come here, God eventually would’ve grabbed hold of me somehow,” Gibson said. “They don’t have a monopoly on salvation, but this is what God used. If I didn’t come to Reconciliation Ministries when I did, I would probably be in prison or worse.”

Program participants go through a 9–15-month discipleship program and upon completion, they begin the re-entry track, which leads them to fully independent living. RM has two campuses, including the newly announced Rooted Campus.

In partnership with the South Carolina District and the D. Moody Gunter Camp and Retreat Center, RM will occupy one of the camp’s dormitories and have access to other buildings onsite. The Rooted Campus’ rural location will provide fewer distractions for men in the program’s first six months.

Brian Poirier is another graduate of RM. After overcoming an addiction earlier in his life, he and his wife became missionaries in Puerto Rico. He became addicted again following a jet ski accident and soon found his life spiraling out of control.

His wife, Karla, begged him to try a new recovery program, so he flew to South Carolina to join RM through a friendship with Trevor Mosely, who is on staff at RM.

RM helped Poirier get right with the Lord again and even helped Karla return to the U.S. to participate in sponsored marital counseling. Brian says his marriage is the best it has ever been.

One night during a prayer service, Karla felt a nudge from the Lord that they should make the move to Columbia permanent. Shocked, they both began to pray and felt the same calling again.

In Puerto Rico, they had been selling roasted coffee to help fund orphanages and addiction recovery programs there, so they brought that business to Columbia. The couple sells coffee through a coffee truck as well as selling beans to churches through RM Coffee. All proceeds help fund Reconciliation Ministries.