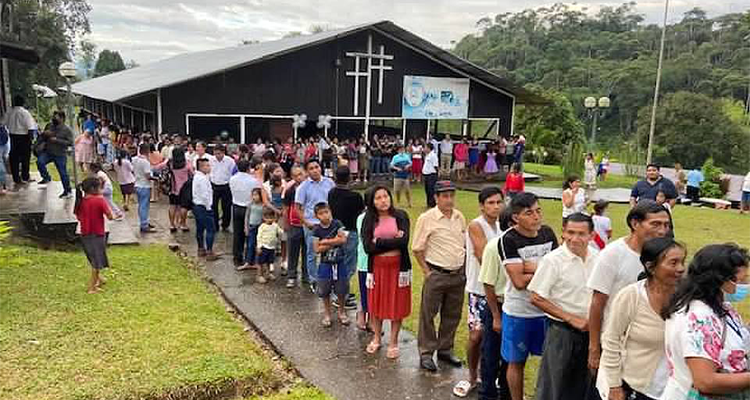 Addie Garman, a missionary who served in Peru for more than 45 years, was laid to rest at the Nuevo Horizonte Mission Station during a memorial service attended by over a thousand people.

“The church seats 500 people,” said Greg Garman, the son of Addie and Larry Garman. “But it’s open, just a screen and a roof, so we had people gathered outside looking in. It was a great celebration.”

During the service, Addie’s ashes were buried in her favorite place, right under her kitchen window that looks out onto the jungle. Afterward, there was a meal for everyone who attended, as well as a wedding for Chris Sharp and Kimberly Ashford, one of Addie’s granddaughters.

Ten more memorial services were held in the nearby villages of Chipe, Chigkamai, Yuan Kasén, Listra, and Pucallpa with hundreds more in attendance. Six new church buildings were then dedicated during the weekend after the memorial and were decorated with plaques in memory of Addie.

At one church, 36 people were baptized in the river, including longtime friends and village residents.

“One of the people baptized was a warrior who was 82 years old,” Greg said. “In the past, he hated the church and spoke against us, but he has changed and now he is baptized.”

Another person was the son of someone Greg had baptized in 1987 in the same river. Two among the baptized were people he had known since he was a child, all of which made it a very special occasion.

“God is miraculously doing great things. He is certainly alive and moving in the tribe today,” Greg said. “The work has just grown exponentially. If it’s working, we want to keep seeing it work greater. ”

Because of the faithfulness of the Garmans’ ministry, there are more than 250 Nazarene churches among the tribes of Peru today. When they first arrived, there were no churches present in that area.

“It really speaks to their legacy and the work continuing,” Greg said. “Most of it is just connecting with people. It’s exciting to see those I grew up with become active in the church. It’s encouraging to see how much they love the Lord and love the church. The Holy Spirit is really moving among the people there.”