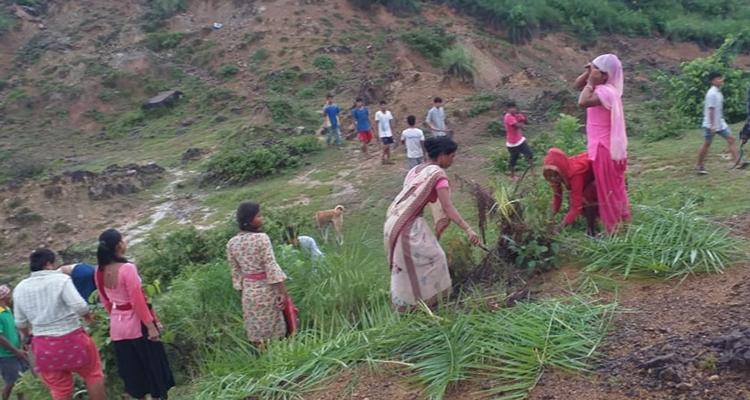 In Nepal, the local Church of the Nazarene is doing something a little different: they’re planting trees. In fact, they’ve planted about 3,300 of them over the last four years.

Nepal is particularly prone to natural disasters—in 2015, a 7.8-magnitude earthquake and its aftershocks killed more than 8,900 people. Steep hills and towering mountains give way to low valleys, and forests help hold that landscape together. Trees prevent erosion that could quickly become catastrophic in the face of floods, earthquakes, and mudslides.

Trees are valued for other reasons, too: they provide wood for food and shelter and can be both used and sold. And clearing forests makes room for buildings and roads in an urbanizing country.

“Among other natural calamities, landslides, floods, and deforestation are the major problems in Nepal, through which people have lost their houses, families, and their own lives,” he says.

The Church of the Nazarene, including a specific youth-led initiative, began doing the opposite by planting trees to reforest what was lost. It is a ministry to both the earth and those that live on it. So far, 19 churches and approximately 150 people are involved in the reforestation program.

The project has also included awareness programs covering the importance of tree planting and caring for the earth. Mukhiya says that many people in the communities they’ve visited have viewed the tree planting project positively. Once the trees have been planted, the group is usually received back warmly.

“We encourage and recommend the local churches ... to take care of their own Garden of Eden,” Mukhiya says.

The group hopes to both continue the program and expand it, ensuring that it will last. Forests create long-term change by reestablishing watershed, preventing erosion, and adding nutrients to the soil. Each of those things will benefit those who live in communities near the new forests.

“As God has given the responsibility to take care of the people and place, including all creation, so this is our duty to keep maintaining His creation,” Mukhiya says.

Nepal has been on a journey of recovery after earthquake and aftershocks. Tree planting is one part of the many projects restoring the country; education, economic development, and agricultural activities are also part of a long- term program developed after the disaster.

Bishal*, 14, moved to Kathmandu with his family after the quake. Their entire house collapsed, and the family lost everything. His father works as a day laborer to try and earn money for his children’s futures.

“He works very hard daily and hardly manages to survive,” Bishal says. “My education is far away.”

Though Bishal was able to attend school, his ability to learn and study was deeply impacted by the poverty the family found themselves experiencing. Just as planting trees is part of the country’s restoration, so is the labor of recovery for those who have survived calamity.

Bishal, who was watching his hopes for a good education slip past with each year he grew older, was invited to a Nazarene child development center. There, he had teachers who could help him learn. It also removed the burden of having to purchase school supplies, something his parents had to save for before.

“I was very weak in my studies, but now I am a good student in my school,” he says. “I could improve my studies because of the tutorial program.”

Each of these pieces—planting trees, empowering families economically, investing in education—will change lives for years to come. The educational support Bishal receives at the center allows him to thrive in school, something that is proven to break the cycle of poverty. As more trees grow and thrive, he will be growing up in a country that is growing, too.

This story previously appeared in 2020 Issue 1 of NCM Magazine.