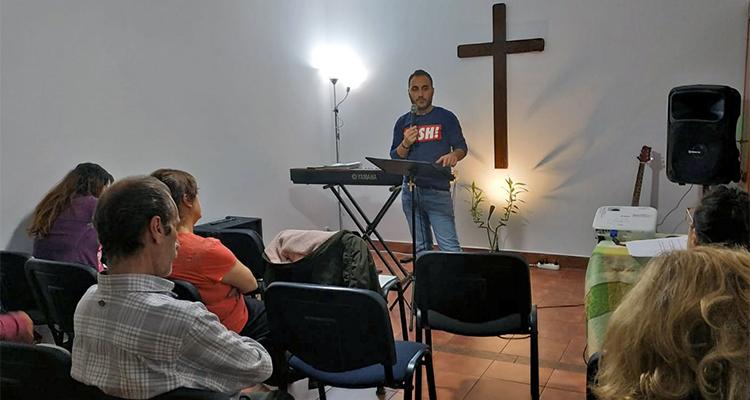 Lena*, Nidal*, and their son Rafi* escaped war-torn Syria with hopes of immigrating to Germany. After stopping in Poland, they found a home there, and Rafi’s call to ministry became clear to him. Lena and Rafi have now started two Arabic-speaking churches in Poland.

“Back in Syria I was thinking about being a pastor, but I didn’t know when,” Rafi said. “After I came to Poland, I saw that God is really calling me to be a pastor. So, I talked with [the missionaries], and I asked them to help continue my studies.”

In 2016, Rafi had the church’s support to invite Arabic-speaking people in Poznan for a one-day conference to gauge interest in starting an Arabic-language worship service. Twenty people participated, and those people formed the foundation of an Arabic-speaking church.

As it grew, the congregation rented space from a Pentecostal church and then later moved to a Baptist church that gave them a room free of cost. The Poznan congregation finally has its own rented space, supported through Nazarene Compassionate Ministries. As the church continued growing, they started a second Arabic-speaking church in Warsaw. Rafi leads worship at one on Saturday and the other one on Sunday.

Before the global pandemic began in March, combined attendance at both locations was about 50 people. Once the pandemic reached Poland, the churches shifted to Zoom meetings and services rather than in-person worship.

“Our vision is to reach the Arabs here and try to evangelize them,” Rafi said.

Lena said the refugees in Poland have developed a community around their shared culture and language that overcomes religious differences. They have become close friends with people from a variety of faith backgrounds, just as they did in Syria before the civil war.

The Arabic-speaking church has opened doors for sharing God with people, both immigrants and Poles. Once, a Polish journalist came to do a video segment about the church. The journalist belongs to another Christian tradition and was fascinated by the way that Nazarenes worshiped and prayed. Rafi’s sermon about the differences between Judas and Peter stayed with the journalist.

“I always remember these words,” he* told Rafi. “I want to be like Peter, not Judas.”

The journalist has developed a relationship with Rafi, Lena, and the church and continues to visit occasionally, even though he lives seven hours away.

“He started to study the Bible and then he had a lot of questions,” Lena said. “He started to share Jesus with people around him. He became a Christian and regularly attends his church.”

Lena also shared Jesus with her Polish language teacher, a woman from Ukraine. Every time they met to study, they would end up talking about Jesus for half an hour. On their last meeting, the woman prayed to receive Jesus.

Soon after, she moved away and started a family, but earlier this year she sent Lena a message: “Lena, now I know God like you. I know Him and I have a relationship with Him. I always pray and I learn what you taught me.”

This story is adapted from a Where Worlds Meet article.