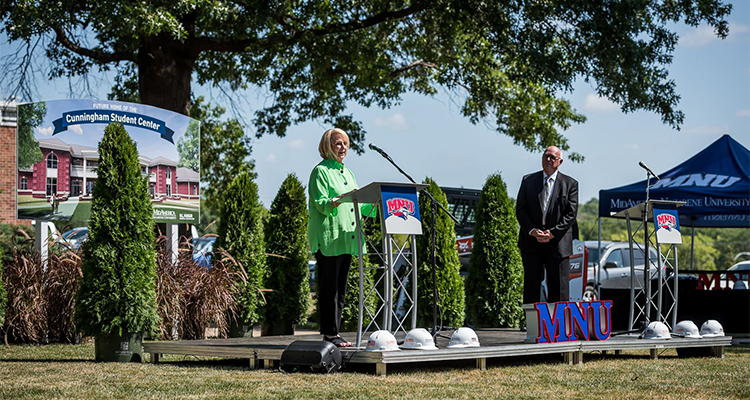 Groundbreaking on MidAmerica Nazarene University’s new Cunningham Student Center was held 28 August. The new building, which is part of the Bright Futures Campaign for MNU, will house student services, the dining hall, Admissions, and more. The building will replace the Campus Center, one of the university's first five original buildings.

The building is named for General Superintendent Emeritus Paul G. and Connie Cunningham, whose ministry and vision has been part of MNU since before its inception.

The ceremony began with remarks from Jon North, vice president for university advancement, an invocation from chairperson of the Board of Trustees, Jim Bond, and remarks from Craig Garrett, a senior student and president of Associated Student Government.

"This building will be a huge asset to the students," Garrett said, adding that it will be a place to form friendships and make memories. He then thanked university leaders and the generous donors who helped make the vision of this building a reality for generations of students to come.

Campaign Co-chairs Tim Buchanan and Dan Rexroth also spoke. President David Spittal expressed thanks for sacrificial fundraising support from many. About 200 people attended,  and social distancing was employed at the event.

Spittal then introduced Connie Cunningham, who spoke with enthusiasm about seeing the dream of this campus and building become a reality. Eleven members of the Cunningham family have earned degrees at MNU.

Cunningham spoke about standing on approximately the same spot more than 50 years ago with her husband. They were scouting the location for the yet unnamed college. The spot was on this hilltop that was then a cornfield. Paul had a scripture he felt the Lord gave him about the spot — Matthew 5:14: “You are the light of the world—like a city on a hilltop that cannot be hidden," (NLT version).

An audio recording of Paul Cunningham was also played in which he recounted a portion of how the university came to be. The ceremonial breaking of ground then began.

Carla Sunberg, a general superintendent for the Church of the Nazarene and a 1983 graduate of MNU, gave the prayer of celebration.