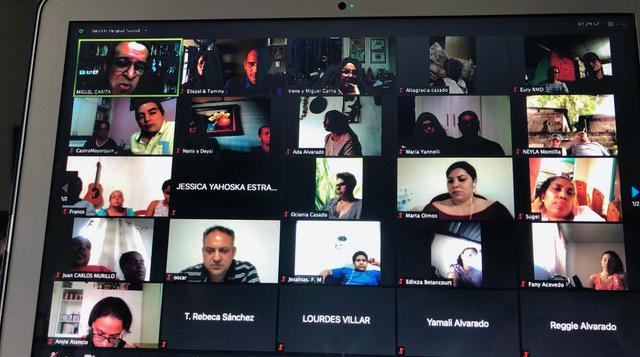 When Panama’s COVID-19 restrictions forced people to stay in their homes, mental health problems began to turn into severe community issues. Missionaries Eliziel and Tammy Soto stepped up, with assistance from the Mesoamerica Region’s Family Ministries, to help those in their apartment complex.

The Sotos had begun to form good connections in their local community in Panama. They had held a movie night at the local soccer field, showing the movie Courageous and attracting many people from the local community. As many events began to close due to the pandemic, the community was hit hard with mental health issues.

“The children and teenagers have had limitations in their social lives,” Eliziel said. “I think one of the ways they are more affected is because of the ways that they interact now. It’s all social media, and that has brought some issues into families at home. Sometimes the families might be in the home together all day, but they’re not really listening to each other or doing things together. It’s like they’re not even paying attention [to each other].”

Domestic violence and suicide numbers began to skyrocket. The Sotos decided to invite their neighbors to a virtual event hosted by the Mesoamerica Region’s Family Care Ministries.

“We sent out invitations, and actually, our apartment complex administration sent an email to everyone that rents here and invited the whole complex,” Eliziel said. “We also invited the church community, and God provided a good time during that event."

Irene and Miguel Garita, family counselors for the region, shared about the importance of working together as a family to deal with pre-existing issues that came to light during the stress of the lockdowns.

“They stressed how important it was to fix those issues first, so they would be able to come out of the pandemic even stronger,” Eliziel said. “They also talked about how we need to look around in our own homes and families and to be thankful for what we have, that we should not be anxious for the things we think we need but focus on being thankful for what we have already been blessed with.”

The Garitas’ message was well received, and many families came to know the Lord through this event. The apartment complex even contacted Regional Director Carlos Saenz to tell him how impactful the event was on their building.

“We had 50 devices on Zoom, which meant probably over 100 people,” Eliziel said. “It was a good turnout for the first time that we were able to do something like that. Some of our neighbors that we know and have tried to build a relationship with, they prayed and accepted Christ. So now the challenge is to continue discipling.”

The Sotos believe their actions were obedience to God’s leading. When they were restricted to staying within their four walls at home, they still found a way to bring the gospel to those outside of them.