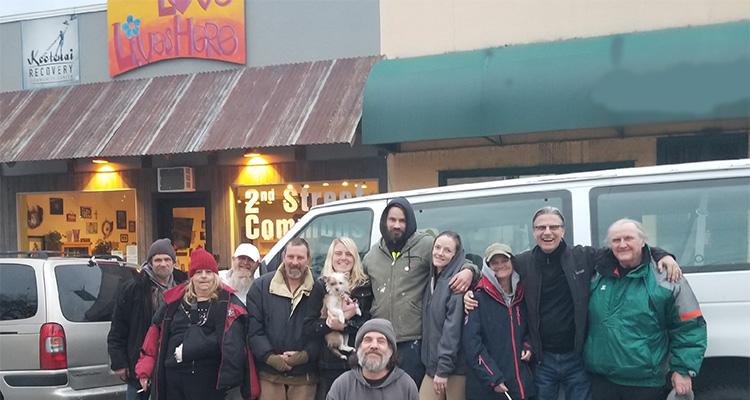 Scott (second from right) and 2nd chance regulars outside of their downtown building (left).

Dirk Scott, an associate pastor at True North Church of the Nazarene, felt a tug in 2015 to start feeding and discipling the homeless in his community of Coeur d’Alene, Idaho. His obedient response to the Lord’s calling has now led to a full-fledged compassionate ministry that is making an impact in northern Idaho.

Scott was at the end of 41-year career as a mortgage banker and bank regional manager when he sensed God leading him to start a discipleship ministry.

“When I told my wife about it, she thought I was kind of crazy,” Scott said. “She said, ‘Where is your building going to be? How are you going to fund this?’ I said, ‘I don’t know, but God called me.’”

The next day, a man approached him about someone who owned a commercial building downtown. The owner kept the building empty, hoping someone would choose to do ministry in it. After meeting Scott, he offered the building rent free. That was six years ago, and the building is still home to 2nd Chance Discipleship Ministries, a Nazarene Compassionate Ministry Center that Scott directs.

In addition to the Lord’s calling, Scott’s own life experience has fueled a passion for the ministry.

Scott’s father was an abusive alcoholic who was unable to work. Scott’s mother couldn’t make enough to support rent or mortgage payments, so the family became homeless. Scott recalled fishing for breakfast on the lake they slept next to, then asking nearby farmers if they could pick vegetables. These experiences have helped Scott relate to the people that 2nd Chance is reaching out to.

“They’ll say, ‘Oh you were never homeless,’” Scott said. “But I ask them if they’ve ever been sleeping outside, and it’s two in the morning, and it’s so cold that you can’t wait for the sun to come up. You’re just praying the sun will come out. And they say, ‘Yeah, you’ve been homeless.’”

2nd Chance Discipleship Ministries has several programs, including one that supports homeless families who are part of the Coeur d’Alene school district.

“We pick them up, get them a hotel room, and get them stabilized,” Scott said. “We pray with them, share the gospel with them, but we also make sure that we get them connected into all the different services that are appropriate for where they’re at. Within two or three days, St. Vincent’s has an emergency housing placement for them.”

2nd Chance Ministries started with Scott responding to the urging of the Holy Spirit, and the ministry grew as the Lord continued to open doors for Scott and 2nd Chance. Scott encourages others to listen to what God is calling them to or laying on their hearts.

“I was just praying and letting God lead my life,” Scott said. “How I’ve seen God work is that He calls you to a work and then He brings the people and the funding to get it done.”