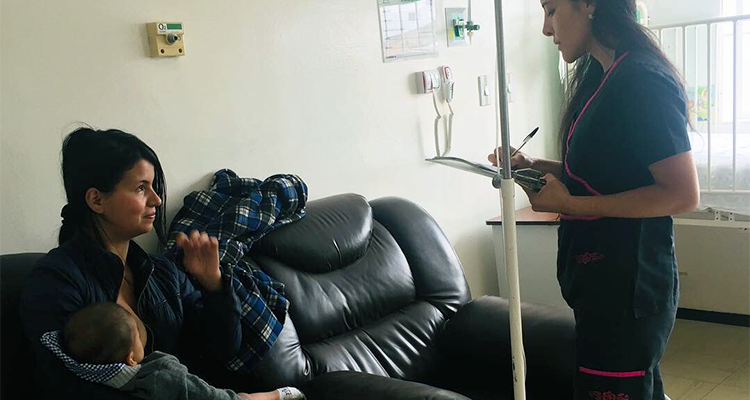 For a few years, Valentina* had been serving as a social worker in a hospital in a town near Bogota, Colombia. She wanted to help the patients there by giving them food, finding clothing, or praying with them. She was frustrated, though. No one seemed interested in helping with the outreach.

Around the same time, José Luis Becerra was planting a new Church of the Nazarene called Hechos 29 (Acts 29), in the same town. He and the church leaders had been praying for a way to become more involved in the community; they wanted to be used strategically to show God’s love through compassion. When Valentina invited them her outreach ministry at the hospital, it was an answer to that prayer.

“We felt that was God’s response for us—God’s answer for us,” Becerra said.

Valentina was thrilled since many other churches in the area had expressed indifference toward the project already. Though Hechos 29 had only 25 members, 12 of whom were children, they used their own money to begin financing the ministry in the hospital.

In the beginning, the church leaders spent several days shadowing Valentina to understand her work. They realized that the hospital was too big for their small church to reach every area. The ministry would have to focus on one group of people.

“The vision … is to work especially with children, with teenagers, with young people, because we found that all these generations are in a very high risk to lose their faith,” Becerra said.

When they came to the maternity ward in the hospital, they saw many young mothers, many of whom were teenagers. The new mothers were also often alone. In fact, an annual study put out by the hospital estimates that 40 percent of those who give birth there are under the age of 17; Becerra says that many of these pregnancies were the result of abuse. The church leaders were extremely moved by the young mothers and knew this was the area where they could serve.

Now, the Pregnant and Nursing Mothers ministry serves mothers with infants and children up to 5 years old. Many of the women aren’t able to bring their children home to the life they would want. Some have been displaced by violence or are living as refugees from Venezuela. Others are living in poverty without a good way to break out of the cycle.

At first, church members started bringing snacks to the mothers who were in the maternity ward. Most of those who visit the hospital are women from the church to help the young mothers be more comfortable. Every Thursday morning, they brought food and offered prayers.

“We want to be a church of acts, [of] God’s love acts,” Becerra said. “We are trying to see the holistic vision for this project.”

Because the mothers didn’t stay in the hospital long-term, the church also designed a database to keep track of their names, contact information, and prayer requests. The project has grown in the past three years to include workshops with the mothers and the hospital administration staff. Mothers can participate in trainings to support emotional health or learn more about entrepreneurship. Pandemic restrictions made hospital visits more difficult, so church members have been relying on their database to check in with the women instead. They visit from a distance and provide food and other essentials.

“We are trying to reboot the ministry and trying to think about what we are going to do with that activity inside the pandemic time,” Becerra said.

This is particularly challenging because often the ministry is one of presence. When a young woman was struggling with a deep depression after losing a child, one woman who participates in the ministry went to her home right away to pray and provide emotional support.

“When we are seeking people, of course there are many stories,” Becerra said. “[Church members were very affected] when we saw how God’s hands were touching people in the hospital.”

This article originally appeared in Issue 1-2021 of NCM Magazine.