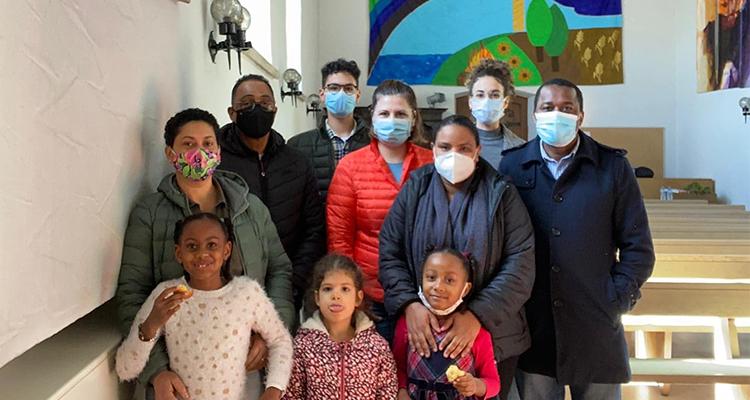 Members of the first Nazarene congregation in Luxembourg

The Church of the Nazarene officially recognized Luxembourg as its 164th world area during the 97th Session of the General Board held virtually in February.

Eurasia Region Director Jim Ritchie added that he was thrilled to officially welcome the church in Luxembourg to the Eurasia region.

“The church in Luxembourg has been faithfully ministering and growing for a number of years and I congratulate them on reaching this historic moment,” Ritchie said. “I believe there is so much to come for them and I will support them all the way as they grow in Christ and in missional influence in their nation.”

Luxembourg is a small country nestled between France, Germany, and Belgium. Its population is just over 600,000, and nearly 50 percent of its residents are foreign nationals. Luxembourg has three official languages: French, German, and Luxembourgish.

He began to pray about starting a church. Following God’s leading, he contacted fellow Nazarenes, and in September of 2017, Cardoso held the first meeting in his apartment. The group eventually expanded and moved into the chapel in their hometown of Bettembourg.

All 17 people in the group come from Cabo Verde, the home nation of General Superintendent Eugénio Duarte. A few months after Cardoso’s group began to meet, the members were invited to the German District Assembly where Duarte was presiding as jurisdictional general superintendent. They met with him and shared a report about how their ministry had been growing.

“He told us to pray and encouraged us to keep going,” Cardoso said. “We spent three and a half years to conclude the process of planting a church. It was hard, but we were patient.”

Cardoso and the members in Luxembourg are focused on finding the right way to reach their neighbors. Even though Luxembourg is predominately a Christian nation, it has a large population that does not identify with any religion.

“Luxembourg is one of the richest countries in the world,” Cardoso said. “People have their material needs [met] and they are satisfied. While this is present in a lot of developed countries, we still feel people are desperate for more, and they need God in their lives. The challenge is to find the best way to share the gospel with them.

“We are doing research, studying statistics, praying, thinking, and try to find the best approach to reach people here. The idea is to improve our methodologies in order to achieve our goals. No one has the key, and we should ask God and use our creativity to find it.”

Those goals, according to Cardoso, are to bring people to Christ while being a positive influence to society.

“We would like to become a part of the solution in this country, adding value to society,” Cardoso said. “Luxembourg has people from more than 170 nationalities. We would like to have a church with people from everywhere. Just as Paul aspired to make the gospel available to the Gentiles, we will try to do the same.”