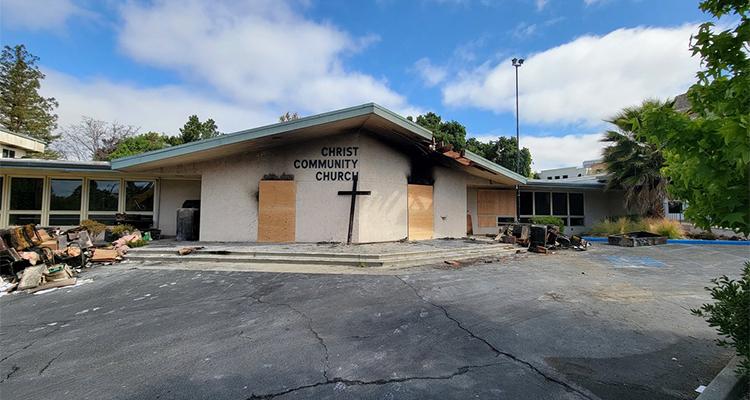 Christ Community Church of the Nazarene in Concord, California, caught fire twice in a four-day span.

Early in the early morning of Thursday 13 May, fire crews were called to the church’s campus where a large fire had broken out. The fire collapsed the roof and eventually the second story.

Investigators have not determined if this particular fire was set intentionally but did discover sleeping materials in a crawlspace under the building. No human remains were found at the scene.

Fire crews were called to Christ Community yet again on 17 May for a blaze that was set at the office building, destroying nearly everything in that wing. Investigators have ruled that fire as arson and have a suspect in custody. It is still unclear if the two fires are related.

Christ Community was in the process of finalizing the property’s sale when the fires happened.

“It’s just a different sadness to prepare for,” said Pastor Janelle Maher. “We weren’t prepared for this, and we had been planning to take a lot of items with us that are now either absolutely gone or it’s very unlikely we’ll be able to repair them. There is a baby grand piano that I know [was significant] for one of the members. Her grandmother played it in the 70s nearly every Sunday for worship, so it’s just very emotional, and it’s hard to not take it a little personally when you do hear that it was on purpose.”

The Bay Area is one of the most unchurched or de-churched American cities, and Maher noted the general disinterest in church for the region. Despite this, the community has rallied around the church.

“I’ve had so many people reach out, whether they’re Christians from other denominations,” Maher said. “Lots of community members have expressed their condolences and offered help cleaning up and things like that. The fire department, sheriff’s department, and police department have been so kind and gracious to us in this time. We’re pretty floored in general by just how far people have gone.”