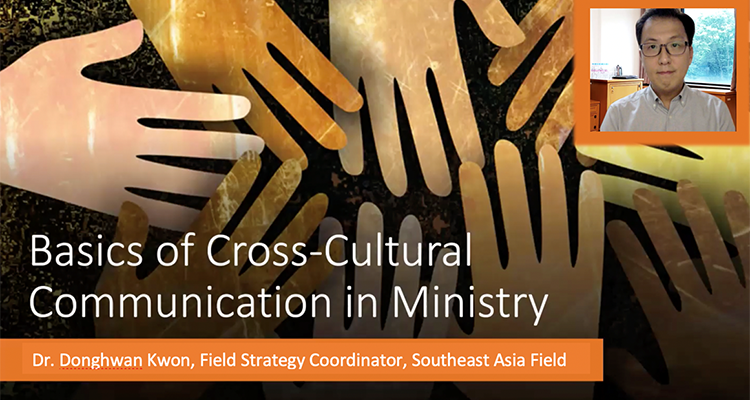 The Asia-Pacific Region’s Engagement and Equipping team held the first online Explore event entirely in Korean so that seven missionaries sent by individual Nazarene churches in Korea could be officially recognized by Global Missions.

The Explore event typically helps those preparing for cross-cultural ministry to be better equipped for missionary service. Since the missionaries were already serving, the Explore training was tailored to fit their circumstances.

The logistics of the event presented a challenge. In addition to being hosted online and in the Korean language, it needed to fit the schedules of missionaries who were already serving on the field in four different world areas (included one Creative Access Area) on three world regions in four different times zones. Fortunately, there were missionaries and church leaders from Korea who were well qualified and willing to provide the orientation.

“Cross-Cultural Communication and Ministry” was taught by missionary DongHwan (Bill) Kwon, who serves as the field strategy coordinator for the Southeast Asia Field. With a doctorate in communications and many years of experience as a missionary, Kwon was well-equipped to talk about the issues involved in cross-cultural communication.

Regional Discipleship Coordinator EunYup (John) Kim helped the participants better understand "The Twelve Essential Characteristics” for effective service for a Nazarene missionary. His involvement with Sunday School and Discipleship Ministries International also allowed him to present the Journey of Grace discipleship framework and how it could be effectively used in missions settings.

Although Asia-Pacific missiologist Lynn Shmidt does not speak Korean, missionary Mijiye Kim provided subtitles for his video lecture on "Worldview” and later facilitated an in-depth discussion. The participants recognized how their cultural perspective had been influenced greatly by Confucian teachings. They discussed how a hierarchical culture can become an obstacle in building relationships with people from different cultures.

Asia-Pacific Personnel Coordinator Dave Hane connected with each participant for a Zoom interview and was pleased with how the training went.

"It was definitely a team effort,” Hane said. “The presenters and facilitators put in many hours of preparation to make this Explore training possible in the Korean language. The fact the missionary participants already had years of field experience added much depth and insight to the training."

In light of the passion for missions in Korea, the Asia-Pacific Regional Office hopes that this training in the Korean language will help to develop and deploy even more missionaries from Korea in the future.