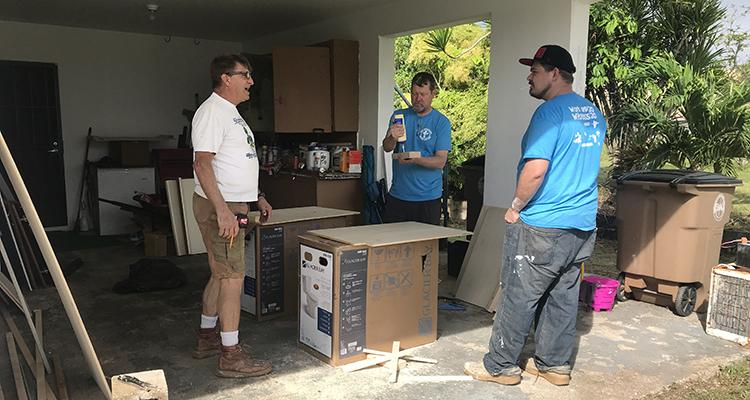 One year after Anderson Sanchez volunteered at a refugee camp where he became close to some of the families, he spent three weeks visiting them in their new northern European homes.

A university student in Manchester, U.K., Anderson gave the summer of 2016 as an M+Power volunteer. He joined other Nazarenes from the Eurasia Region and around the world in a multi-denominational partnership to serve in a Greek refugee camp.

Their roles went beyond sorting and handing out clothing and food. The volunteers sought to build relationships and trust with those they served, and in that context, to demonstrate God’s love for them.

“It was not just a project from the Nazarene church," Sanchez said. "We really care about them and we really want to establish relationships with them, and not just treat them [like] one more project.”

Anderson and other team members became close with some of the families by spending much time together eating and talking. After the summer was over and team members returned home, they maintained regular contact with their new friends.

So, when some of the families were resettled in northern Europe, they invited Anderson to come visit them. In the refugee camp, they had all talked about how they wanted to meet again.

“When I was living in Greece, no one wanted to say goodbye. We had a really good time,” he said. “We were saying, ‘No, I am coming to visit you. We will meet again.’”

Spending three weeks in July and August receiving the hospitality of 12 families was a fulfillment of that promise. The families were thrilled to have Anderson and another volunteer to come and stay with them, and continue their friendship.

The governments in France, the Netherlands and Germany provide housing to refugees who have legally settled there. Anderson’s friends are relieved to be in warmer, dryer shelter with private bathrooms, bedrooms and kitchens – unlike in the camps. Yet, they still face challenges. They need to learn the local language in order to secure visas. The older family members worry they won’t be able to learn a new language.

Many come from cultures of hospitality where community is important and large, extended families live close together. But now they are excluded from surrounding society and neighbors by cultural and language barriers.

“They are always on their own,” they told Anderson. “They miss eating together in big groups. They miss that time in Greece when we used to eat together at night, sharing food. Now … they don’t know too many people.”

Anderson said that their relationships and language haven’t progressed to the point of sharing spiritual and faith conversations, but he hopes someday it will.

“They do appreciate the fact we are Christians, and one family highlighted that they now look at Christians in a better position [than people of their own faith] because of what we are doing with them,” he said.

He said the most special moment of the trip was when he arrived and the family ran toward him, and he ran toward them; he felt he was meeting his “real family.”

“What we built in Greece didn’t change for the time we were separated. It was really good.”

“We hope to keep raising missionaries and volunteers and send them out to do ministry – compassionate ministries – that they go and find their call in the Kingdom, that they see the world is more than what we are seeing now.”

For more information on how the Church of the Nazarene helps refugees, visit ncm.org.