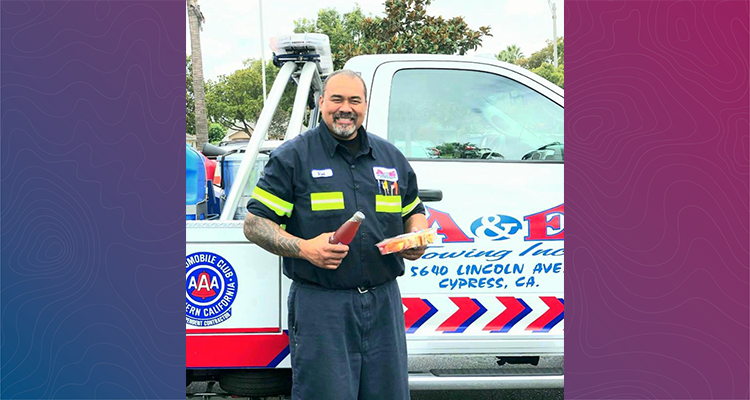 A Nazarene pastor in Los Angeles, California, who also works as a tow truck driver has been sharing the love of Jesus Christ during his service calls since 2014. Through his “ministry on wheels,” he has led over 20 people to the Lord.

Vaimagalo Tafaoimalo has worked for A&E Automotive Repair & Towing for over 20 years. He’s also known as Pastor Vai at Garden Grove Church of the Nazarene, where he serves as an associate pastor to the multicultural congregation. When he became a Christian in 2012, his wife, Tracy, began pushing him to use his service calls as opportunities for evangelism.

Vai’s soul was rescued thanks to the church at which he now serves. For many years, his life was dominated by drug and alcohol abuse, but in 2012, he started connecting with the Garden Grove Church because of his and his brother-in-law Wesley’s love of “hot rod” cars. Vai and Wesley would bring their cars to the church’s fall “Trunk-o-fest” and pass out candy.

Sometime later, Wesley became extremely ill and spent time in a coma. After he came out of the coma, he was unable to speak because of a tracheotomy. He wrote on a clipboard that Vai and Tracy needed church because he had “seen things on the ‘first floor’” while in his coma. Vai believes that by “first floor,”  Wesley meant Hell. Wesley had also envisioned Vai and Tracy going to a specific church, which he described in detail.

When it became apparent that Wesley was going to pass away, the family called Garden Grove’s pastor at the time, Tony Falealili, who came to pray with the family. After Wesley passed away, Falealili offered the use of the church sanctuary to hold the funeral service. When Tracy saw the sanctuary for the first time, she dropped to her knees and began to weep. The sanctuary matched, detail for detail, the church that Wesley had described to her in his coma visions.

“He had never set foot in that church,” Vai said. “But he described in detail what the church looked like. This was the church he wanted us to be at.”

After the funeral service, Vai and Tracy began attending Garden Grove and later became Christians. Vai soon became a greeter and then started taking ministry classes through the Anaheim District. He is currently a district licensed minister on track for ordination.

Vai’s tow truck ministry has continued to grow in the years since he became a Christian.

“Sometimes I get a weird look because [customers] have never experienced this from a tow truck driver before,” Vai said. “They’re expecting a [greasy, sweaty, dirty person] to just show up with an attitude, but God has me there for a reason.”

Vai does his best to make his customers comfortable by keeping the inside of his truck spotless and smelling good. He gets to know his customers’ situations and finds opportunities to say “Amen to that” or “Praise God for that!” From there, he finds ways to introduce God into the conversation and eventually shares the gospel. When he leads someone to Christ, Vai hands out Bibles and a card for Garden Grove Church of the Nazarene and even keeps a log so he can maintain contact with the person. Many of Vai’s fellow drivers are also Christians as a result of his witness.

During one of the ministry classes Vai attended, Anaheim District Superintendent Rollie Miller made a statement that has motivated Vai’s ministry on wheels to this day: “Winning one soul is worth more than the wealth of this world.”

“[The statement] blew me away,” Vai said. “I took it down and I ran with it. Every time that I hear that, it makes me want to go out there and win souls.”