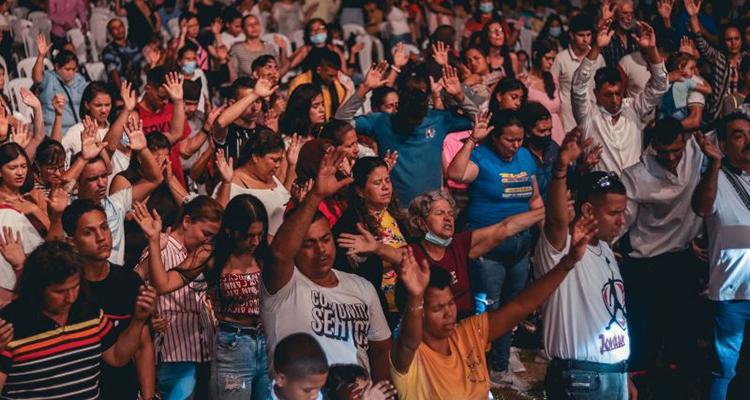 Iglesia del Nazareno Gloria Postrera held an evangelistic event attended by more than 1,700 people, and more than 600 committed their lives to the Lord.

Exodus Mission began in 2006 as an Easter celebration service for the local church in Giron, Colombia. That year, Pastors Milton and Gina Mateus felt challenged by the Lord to step out of their comfort zone when they saw many people practicing idolatry and wandering without God.

“That broke our hearts to see so many people lost while we were enclosed in four walls enjoying our own salvation,” Milton said.

In 2012, the service turned into an evangelistic event for the community. Year after year, more people joined the event. In 2018, the 400-person church building saw an attendance of more than 580 people. In 2019, the church leadership decided to rename the Easter church service Exodus Mission. In 2020, because of the pandemic, the event was held online. More than 500 devices followed the live event.

In preparation for the April event this year, church leaders committed to praying and fasting for 40 days. The prayer sessions began at 3 a.m. to intercede for the logistics and the potential attendees. The church spread out in the community to invite people, show the JESUS film, and knock on doors to pray for the sick. The event was held in an open space. Many responded to the message by going to the altar for a time of prayer.

Many who have attended the event for years have experienced healing and transformation during Exodus Mission. One of them is Mayra*, who attended the event in 2019 for the first time when she was just 14 years old. At the time, she was a victim of abuse of many kinds.

Since then, the church has gotten involved in her life and has helped her in her spiritual journey. Mayra testifies that she has received freedom.

“God has brought me peace and healed my body. I experienced total healing in my heart during the event,” Mayra said.

This year, she was part of a skit and was one of the organizing committee members.

“I have been able to forgive others, and for the first time, I was able to put behind many of my fears,” she said.

*Name changed to protect the identity