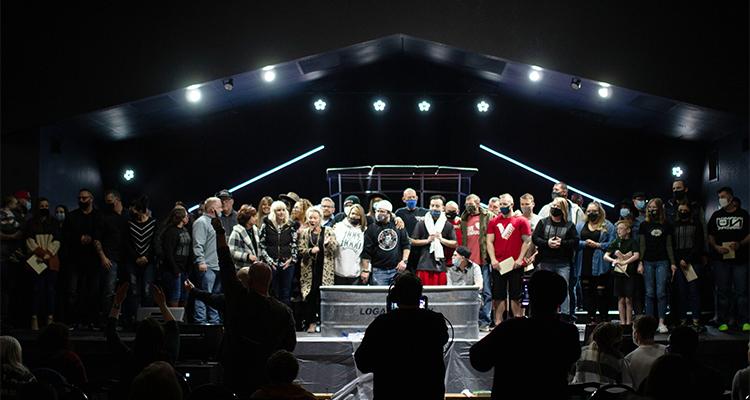 The Well celebrates those baptized, welcomed into new membership, or granted local and district licenses.

The Well Church of the Nazarene in Springfield, Missouri, held a Night of Celebration on 31 January 2021, baptizing 32 people and welcoming 53 new members. In addition, 11 people received their local minister’s license and one person was recognized for receiving a district license.

The church’s quarterly Night of Celebration service brings together the two campuses to celebrate those who wanted to be baptized or join the church as official members. According to Discipleship and Outreach Pastor Hannah Allison, many of the people who become new members or get baptized in these services come through the church’s recovery program, Redemption.

“Ever since the beginning, we’ve said that we’re going to be a church for all people,” Allison said. “A big part of why our church is called ‘The Well’ is the story of the women at the well and seeing how Jesus works through the people in the Gospels who were broken and judged.”

John Carpenter, one of the 32 people baptized at the end of January, shared his testimony.

“I completely condemned myself and became suicidal and empty inside,” Carpenter said. “Four years ago, I was stabbed in the heart from a bad drug deal and God intervened in my life. I knew it then yet still wasn't spiritually mature enough to understand it. Entering The Well, I have begun to learn of God's attributes, and I'm getting completely plugged in serving on the security team, tithing, and being discipled by fellow members. Networking with the church has drastically changed my outlook on life, and the gospel of Jesus Christ has brought a joy back into my life that I never thought would be possible again. There is victory in the process. I have faith beyond measure, and through Jesus Christ all things are possible!”

The church began after two former residents felt called to plant a church in the heart of the city they grew up in. Current Lead Pastor Selena Freeman and Evangelist Dylan Robinson shared their calling with each other and realized they both had the same passion.

Five years ago this Sunday, The Well held its first service at the Hilton DoubleTree Hotel in Springfield. The church soon began renting a location in downtown Springfield, and a year later they launched Redemption, their recovery ministry. A year after that, they started a location four miles north. In February of 2020, they began another location 40 minutes to the south in Aurora, Missouri.

Recently, they joined both of the Springfield locations together at the North campus.

“Our downtown location had become extremely high on rent, and we knew we would not be able to do what we are called to do—plant more churches—if we kept that location going for much longer,” Allison said. “At the moment, we can fit our entire Springfield congregation within the North Campus. It makes our mission more capable of coming to fruition.”