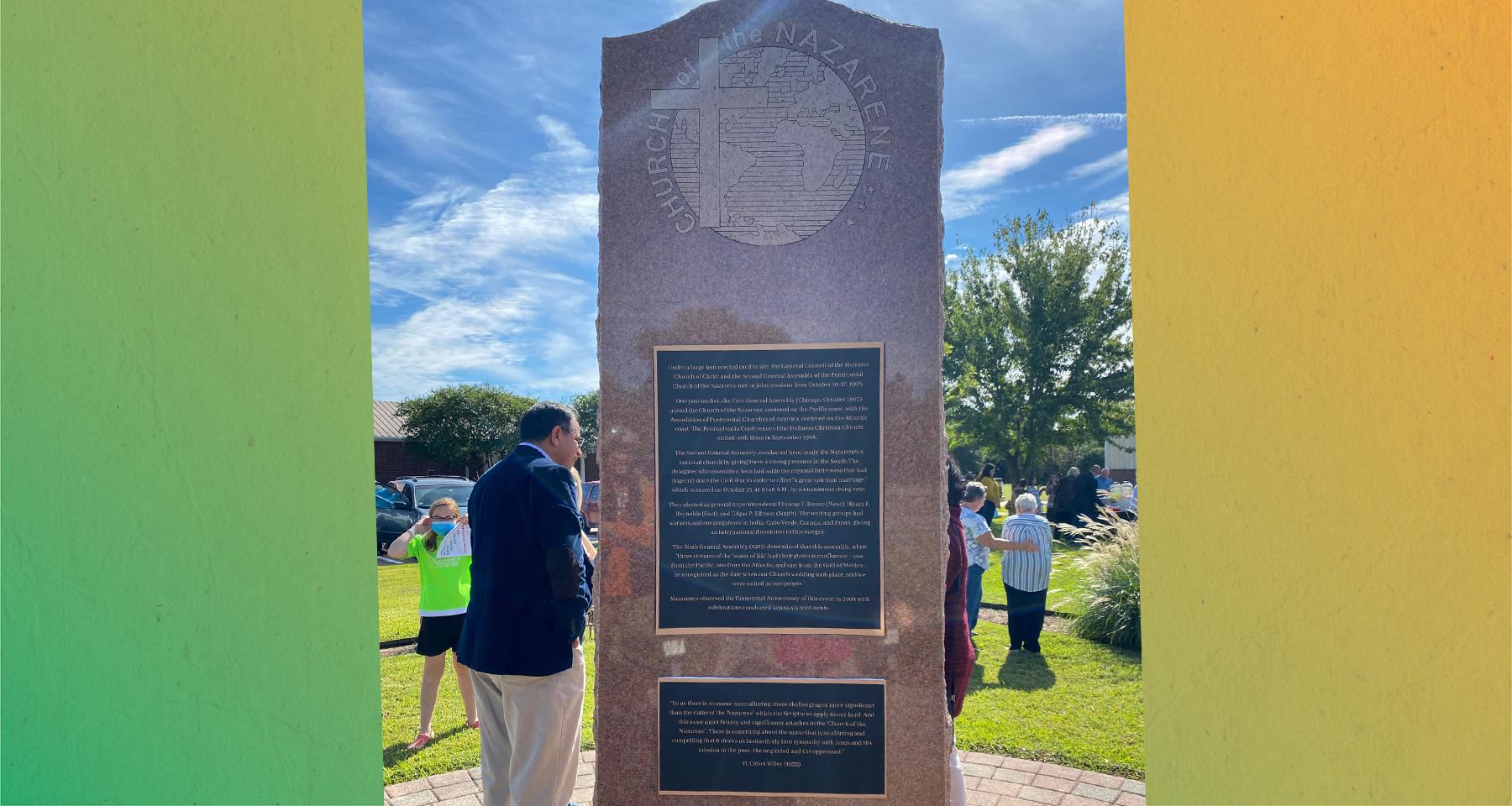 Grace Point Church of the Nazarene in Pilot Point, Texas, celebrated the denomination’s 113th anniversary on 17 October 2021 by dedicating four new plaques, which were added to the monument that stands outside of the church.

General Superintendent Carla Sunberg shared a sermon, and Nazarene Archives Director Stan Ingersol gave a speech about the movement’s founders and the denomination they birthed that day. Many members of Grace Point’s current congregation are new to the denomination, so this was the first time some had heard about the importance that Pilot Point holds in the Church of the Nazarene’s history.

"I was honored to participate in the celebration of the Church of the Nazarene’s heritage at Pilot Point," Sunberg said. "The occasion was a powerful reminder of the sacrifice, commitment, and unity that marked the birth of this holiness denomination."

During the celebration, leaders updated the four plaques on the monument to commemorate the founding in 1908.

“The Second General Assembly, conducted here, made the Nazarenes a national church by giving them a strong presence in the South,” the new plaque reads. “The delegates who assembled here laid aside the regional bitterness that had lingered since the Civil War in order to effect ‘a great spiritual marriage,’ which occurred on October 13, at 10:40 AM, by a unanimous rising vote.”

“To us there is no name more alluring, more challenging or more significant than the name of the ‘Nazarene’ which scriptures apply to our Lord. And this same quiet beauty and significance attaches to the ‘Church of the Nazarene.’ There is something about the name that is so alluring and compelling that it draws us instinctively into sympathy with Jesus and His mission to the poor, the neglected and the oppressed.”

These two plaques are on the front face of the monument. The third and fourth are on the reverse and address the significant addition to the Church of the Nazarene that the Holiness Church of Christ, headquartered in Pilot Point, provided.

According to plaque three, “The Holiness Church of the Christ had 100 congregations in Tennessee, Arkansas, Missouri, Texas, Oklahoma, Alabama, and Georgia, as well as workers in India and Japan when it joined the Church of the Nazarene in 1908.”

Plaque three also mentions the inclusion of Rest Cottage Maternity Home and Rest Cottage Orphan’s Home as part of the merger. These two social ministries were already established in the Holiness Church of Christ and served the orphans and single or unwed mothers. Ingersol noted that, of the four main pillars of the Holiness Church of Christ, two were social ministries.

The fourth and final plaque is a quote from Phineas F. Bresee, the first general superintendent of the Church of the Nazarene.

“We feel ourselves a part of that body of believers raised up to spread sanctified holiness over these lands, and thus that we are a part of that company who are the real successors of John Wesley and the early Methodists.”