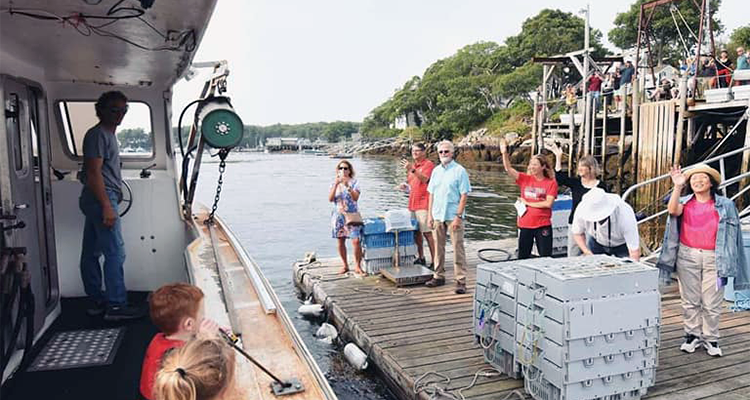 Cundy’s Harbor Church of the Nazarene has tapped into its local fishing culture for the annual Blessing of the Fleet. The event, which began 15 years ago, is one of the community’s most anticipated events of the year as the town unites for an afternoon of fellowship.

This year’s Blessing of the Fleet saw 228 people gather at the harbor to witness the blessing of 34 boats. A local bagpipe player volunteered to lead attendees in Amazing Grace, and Lead Pastor Veronica Gonsior preached the gospel. Her message was broadcast to the crowd on the dock and over the boats' radios. After the message, the boats came one by one past Gonsior as she waited on the dock.

“I have a cedar branch that I dip in the water,” Gonsior said. “And then I have everyone on the dock and on the wharf join in with me, so it’s not just me calling on God for a blessing. We say, ‘In the name of the Father, the Son, and the Holy Spirit, may God bless you and keep you.’”

As the final boat passed by Gonsior, she gave them a wreath to release at the mouth of the cove in memory of all those who had gone before them.

“There are still boats that don’t participate,” Gonsior said. “But those that do [participate] look forward to it every year. It’s a very special time, and it brings the community together, giving me a wonderful opportunity to share the Word of God.”

Cundy’s Harbor Church of the Nazarene is located in Harpswell, Maine, a small community built around the fishing industry. Gonsior grew up there, and her family has been involved in the fishing legacy of Harpswell.

“My father and his four brothers were fishermen,” Gonsior said. “My brother is a fisherman, my father’s father, and his father, as far back as we can remember were all fishermen.”

While Harpswell is a working-class community, it’s also a more affluent community. When Gonsior sought a way for the church to get involved in the community, she had to look for what they cared about.

“We don’t have a lot of homeless people, and there wasn’t a need for a food bank or clothing closet,” Gonsior said. “So how do you reach out to people? What do they care about? Well, they care about fishing.”

The fishing community can be pretty competitive according to Corey Hawkes, a member of Cundy’s Harbor Church and a lifelong fisherman. The competition between boats or crews can flare up because their livelihood relies on fishing. But Hawkes sees the value of the event on the well-being of the community.

“It’s a good way of remembering your neighbors, your friends, family,” Hawkes said. “It’s a good poke for those who don’t believe [in God] to hear that we’re safe. Doing what we do can be very dangerous, but God has a hand in it every day.”