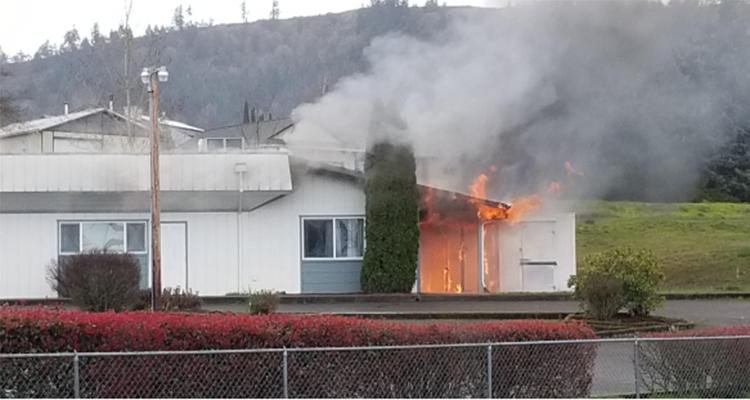 (Winston, Oregon) — Community members are speaking out in support after Winston Church of the Nazarene went up in flames Saturday 27 February, leaving the congregation without a place to gather.

Cindy Slaymaker is the pastor of the church. She said she immediately received a call when the fire broke out. By the time she arrived at the scene, the air was filled with smoke and she could see it from several blocks away.

"I just burst into tears when I saw what was going on," Slaymaker said.

Although this is a devastating event and likely the end of that particular building, Slaymaker said she won't let this stop her and the church from advancing their mission.

"[We're] looking forward to what happens next for us here in a positive way. We're ready for good," Slaymaker said.

She also said she's been in discussions with several local churches about a temporary worship space but nothing is set in stone yet.

Eugene resident Dale Herbert, along with several members of the community, helped construct this exact building years ago. He said it was tough to see the church he helped create be completely destroyed.

"It was unbelievable what had happened," Herbert said.

Winston resident Jenette Short said she believes she was the first person to notice the fire as she was driving back home.

"I told my husband to stop. There's a fire! I got out and called 911 right away, and within minutes the flames were just shooting."

She said once the windows in the room where the fire started blew, the rest of the building went up in flames. The entire building has heavy water, smoke, and fire damage. The church appears to be damaged beyond repair.

The fire is still under investigation, as two young children have been linked to the fire.

This story has been reposted with permission from KEZI.com. To view the original story, click here.