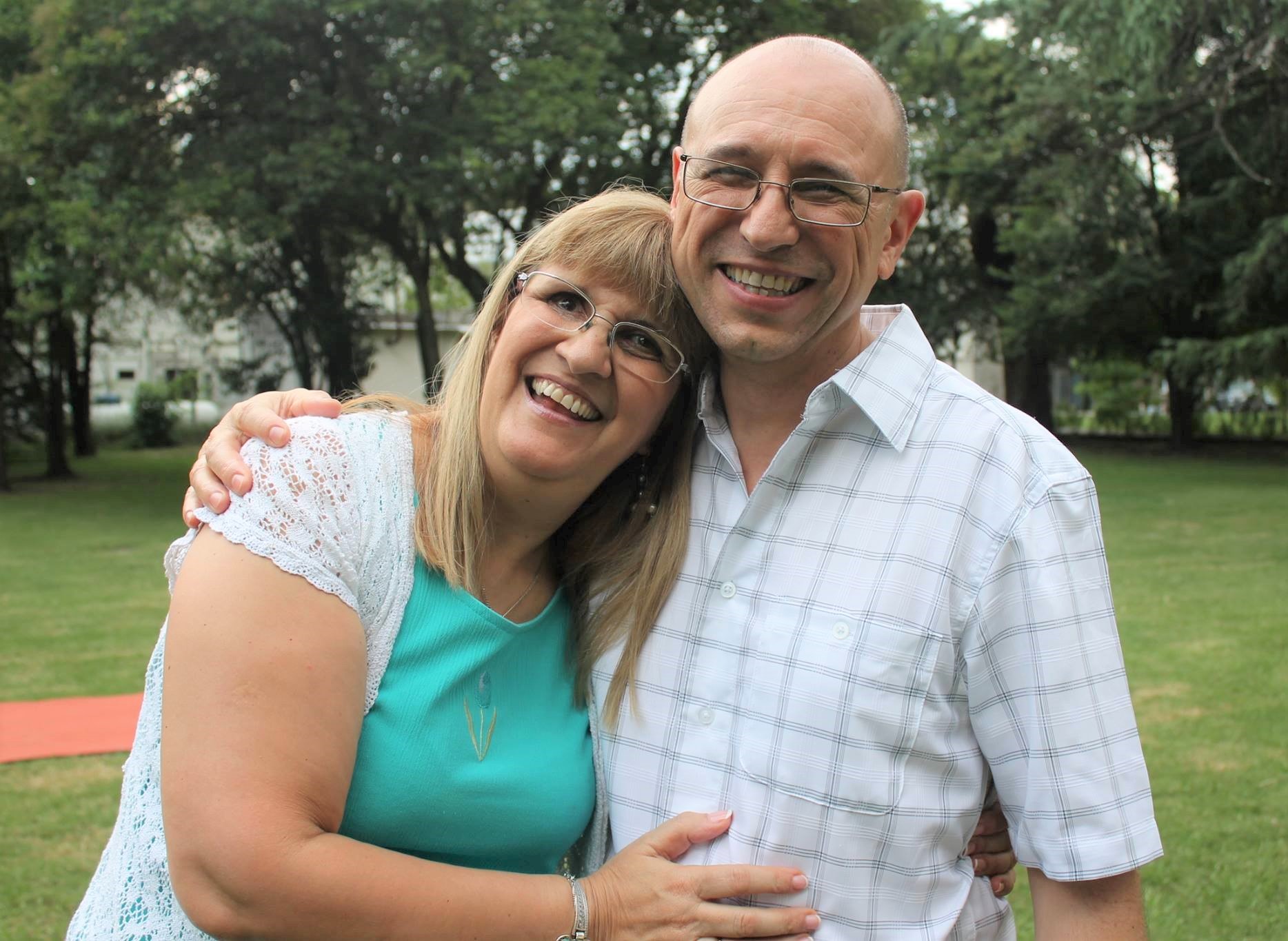 Missionaries, Patricia Pandolfo (12/4/1962) and Germán Picavea (10/31/1961), were born in Rosario, Argentina, where they met the Lord and both (individually) received the call to ministry.

Patricia is from a Nazarene heritage. Her grandmother, and later her mother, kept alive the flame of holiness. Germán, on the other hand, is the first convert of his family.

Patricia received her call to ministry when she was 18 years old. After many trials, the Lord came through and allowed her to attend the Nazarene Theological Seminary of Pilar in Buenos Aires, where she obtained her Bachelor’s Degree in Theology. Germán, from the moment of his conversion, (9/16/1983) started to serve the Lord. He participated in the establishment of the Church of the Nazarene in the Fisherton neighborhood of Rosario City in Argentina, where the Lord confirmed his call into ministry, and he started his theological studies through extension courses.

On April 13, 1985, Patricia and German were married and immediately started their work as associate pastors in the church where they were born spiritually, the Church of the Nazarene on Montevideo Street 1453, Rosario. After a time of pastoring and with the goal of improving academically, they traveled to San José, Costa Rica to continue their theological studies.

Upon arrival in Costa Rica, Patricia and Germán received a training grant in the EIRENE International marriage enrichment program. The first beneficiaries were those who were just celebrating their first year of marriage but understood the need to work on strengthening marriages. With a lot of reservation because of their inexperience, and in the midst of all other occupations, they always found space to minister to married couples.

Starting in 1987, Germán worked in different departments of Latin American Nazarene Communications, which was the only Center of Communications for the Hispanic world. Patricia’s responsibility was to serve in CENETA (now Decentralized Theological Studies) and in Sunday School Ministries (now MIEDD). Together they started a prison ministry: “Fundación MAE (Ministry to the Incarcerated Foundation), in which they worked for 11 years. Many of the prisoners, their families and even prison officials, were nurtured by the teachings and advice of Patricia, Germán and the group of brothers and sisters who accompanied them in the ministry. They collaborated in various roles in the Central District of Costa Rica, in which they emphasized the education and training of youth pastors in the district youth council of the Nazarene Youth International. They also served as youth pastors and leaders of Marriage Ministries in “El Alto” Church of the Nazarene in Alto de Guadalupe.

In 1990, both were ordained in the Central District of the Church of the Nazarene in Buenos Aires, Argentina.

In June 1997, they entered the missionary service in the MAC Region (Mexico and Central America) now Region Mesoamerica. While living in Guatemala City, Germán was the Regional Coordinator of NYI from 1998 to 2005, a task that brought much satisfaction to his life, especially to see young people transformed by the Lord. Starting in 1997 he served as Radio Manager for the MAC Region. In that position, he advised radio projects in different districts, conducted training workshops and worked to establish a self-sustaining and self-serving radio ministry in the region's churches. In June of 2006, he saw the project of the first Internet radio station of the Church of the Nazarene take shape: IDN Radio. Moved because of the lack of resources, he began to serve in the production of different literature materials. For 5 years he served as Literature Production Manager for the MAC Region, developing graphic projects for the different ministries.

Patricia was International Ministries Coordinator of Sunday School and Discipleship (SSDMI) for the Central Area of the MAC Region (Guatemala, El Salvador and Honduras) from 1997 until 1999, when she was invited to serve as coordinator of the same ministry, SSDMI, but now for the entire MAC Region. During that time she dedicated herself to developing a team, developing leadership and seeking the activation of all of the ministries that SSDMI has under its responsibility. To do this, Patricia and her team invested a lot of time in the creation and development of materials as well as the production of training workshops for the strengthening of the SSDMI. In 2004, Patricia received a doctorate in ministry from the Nazarene Theological Seminary in Kansas City, USA.

During the years 2006 to 2008, in parallel with their responsibilities as missionaries, Patricia and Germán carried out an interim pastoral ministry in the Church of the Nazarene City of San Cristóbal, Guatemala City. From April 2008 to July 2011, Germán served as editor-in-chief of Nazarene Publishing House and Patricia as editor of ministerial publications in the same editorial for the 24 countries of the Spanish speaking world in which the Church of the Nazarene has a presence. After the closing of the Nazarene Publishing House, the Lord took Germán and Patricia to their native Argentina to serve the 10 countries of the South American Region. They live in Pilar, Buenos Aires 50 km from the Capital. Patricia began serving as the Coordinator of SSDMI for the entire South American Region and in early 2015, in conjunction, assumed the Ministry of Literature that is responsible for the production, distribution and sale of books and other resources for the development of the Lord's church. Germán, from 2011 to 2015, served as Communications Coordinator for the South American Region. Germán and Patricia are currently seeing and participating in the realization of a dream: the creation of the Ministry for Marriage. Patricia and Germán are beginning the implementation of the Ministry for Marriage in the 10 countries of the South American Region, a task that they undertake with joy and commitment to strengthen marriage and advance the kingdom of God in the southern part of the American continent. Likewise, in the year 2014, Patricia and Germán obtained the title of Social Psychologists from the Argentine Psychosocial Center.

As a married couple, they flourish in the area of preaching and marriage counseling, and they conduct talks, workshops and retreats. A work that not only fills them with joy but also allows them the joy of growing every day in the love relationship that God, in His grace, allows them to live.

Their son Natanael (1987), B.A in Social Communication, has also studied music and plays the guitar. The Lord called him to missions and in July 2011, he moved to San José, Costa Rica to serve the Lord in the Ministry of Communications of the Church of the Nazarene in the Mesoamerica Region (Mexico, Central America and the Caribbean). He serves actively in the Church of the Nazarene in Barrio Los Angeles in Mozotal as director of the ministry of worship.

Their daughter Priscila (1992) is an executive bilingual secretary (Spanish-English) and presently lives in Argentina with her parents and works in the Purchasing Department of Editorial KEL. The Lord called her to the ministry with children, and she currently serves as Children’s Pastor and member of the pastoral team at Altos de Pilar Church of the Nazarene, Pilar, Buenos Aires.

For their part, Patricia and Germán, since arriving in Argentina, participate and serve in different ministries in Altos de Pilar Church of the Nazarene. They founded the Ministry of Literature and at the beginning of the year 2013, they started the Marriage Ministry CAFÉ (Casados Felices [Happily Married]) through which they offer premarital classes, conferences and counseling to the couples that require it. Something that is taking a lot of strength and is of significant help to the participating couples are the Retreats for Marriages that they carry out each year. They also support the pastor in preaching, education, the ritual worship service and in different activities that are requested.